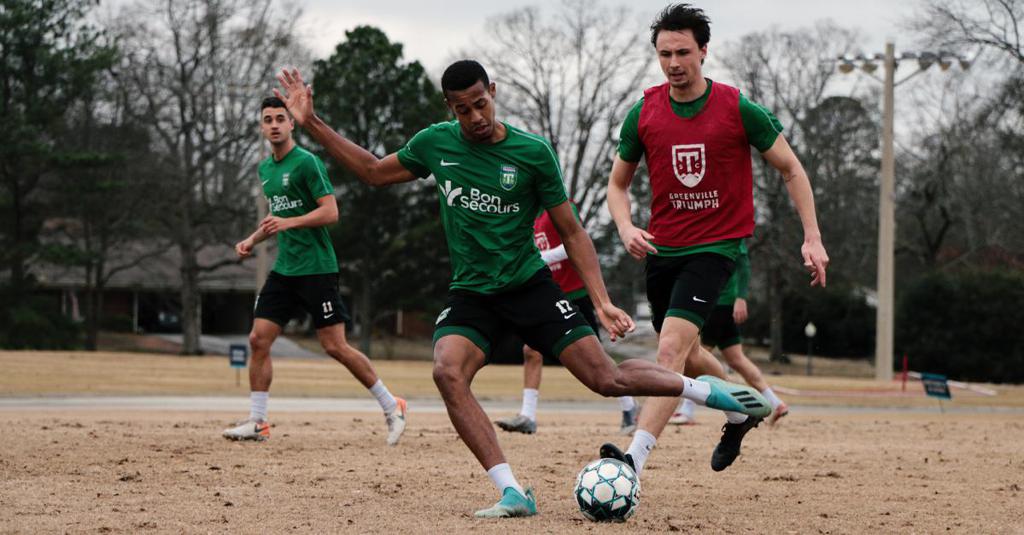 1. Can Greenville match their stellar defensive play from 2019?

Throughout their inaugural 2019 season, Greenville's defense was the consistent anchor that showed up week in and week out. Filled with veteran USL players, they posted a league-best 14 clean sheets with only 23 goals conceded across 28 regular season matches.

As reliable as the first-year squad proved to be, GTSC acquired a few new defensive parts throughout the offseason. USL Championship fullback Abdi Mohamed made the move to the Upstate along with former Lansing Ignite captain Brandon Fricke, adding plenty of flair to Greenville's defensive third. Mohamed, who spent last season with Memphis 901 FC, is an attacking-minded right back who is valuable on both sides of the ball, while central defender Fricke brings League One experience paired with heavy tactical ability that will organize the players in front of him and take some pressure off 2019 league One GK of the Year Dallas Jaye.

The biggest insight to Greenville's defensive success is head coach John Harkes's philosophy that all eleven players play a role in keeping opposing goals at bay and collecting clean sheet cards. In year two, Harkes will rely heavily on his already-coached veterans to instill this philosophy into the club's newest roster additions. And when you can rely players like Jaye, Polak and Lee, it's safe to say GTSC's defensive scheme will be "on lock." Jaye became League One's first ever Goalkeeper of the Year. Polak, the All-League First Team selection, only missed one game throughout all of 2019 -- to a yellow card accumulation suspension -- and Lee boasted over 75% success rate in tackles last year. With Greenville returning several defensive players who contributed major minutes to the cause, it's likely that GTSC will produce yet another stellar backline.

2. Will a returning Greenville core produce a faster start to the 2020 season?

The Upstate club experienced some growing pains with a slow start last season, only winning four matches from March to July and netting just three goals in their first six outings. This came while preexisting clubs like Tormenta, Tucson and Richmond were mainstay players in the top half league's power rankings for the first six weeks of the season with core roster players familiar with one another. GTSC, meanwhile, had to build their roster from scratch. Triumph SC doesn't have a "feeder" team, Youth Academy Team or an MLS umbrella from which to pull players. So, perhaps, the reason for the team's slow start was due to the fact that all eleven players on the field (plus the many-used subs) needed some time to find their collective rhythm. With GTSC returning a hefty load of players from 2019, the team will have a lot less meshing to achieve before goals should start pouring in.

3. Will set pieces see any improvements?

This was a point of struggle for the Triumph, converting on less than two percent of set pieces taken last season not including penalty kicks. This year, the team is making set piece efficiency a point of focus not only in training but also with some of their off-season acquisitions. Defender Brandon Fricke joins 6'4" returner Evan Lee and 6'2" forward JJ Donnelly, while others should benefit from a preseason filled with extra emphasis on converting their chances.

"Set pieces are a critical area for us to improve on this year," said head coach John Harkes. "It's no secret we struggled with them last season, but as the team continues to gel, I expect us to be much more opportunistic when the chances arrive in 2020."

The Super Sub won't likely come on the defensive front, but there is room for a game changer in the Triumph attack. A clinical attacker who can stretch defenses is always very dangerous in the late minutes of a match, especially when only a handful of chances are on the table to decide between three points or none.

Who the "Super Sub" will be depends quite heavily on the system Coach Harkes chooses to play this year, as well as the health of Jake Keegan after undergoing foot surgery late last season and missing the club's final nine matches. There's a good bit to uncover about this Greenville offense, from who will play in the wide positions and create good service to where each of the returners (Gomez, Keegan and Donnelly) will all fit.

While every role is up in the air this preseason, the offensive personnel seems to contain the most question marks -- not from a lack of talent, but a surplus. Offseason signee Alex Morrell can be dangerous both on the flanks and as a paired duo up top while Gomez can play the "10" and as part of a dynamic two-front.

With Coach Harkes having more attacking depth in 2020, figuring out which players perform best together and in different defensive schemes will be important to look at this preseason to determine our Super Sub.

5. How will GTSC stack up against USL Championship sides during preseason?

In a span of two weeks during the 2020 season, Greenville Triumph SC will face three top-15 USL Championship squads from the Eastern Conference: the Charleston Battery (9), Charlotte Independence (13) and North Carolina FC (7). Preseason looks slightly different from 2019 when the team almost exclusively faced local college teams before hosting a Championship side, the Charleston Battery, in the second round of the U.S. Open Cup. This year, however, the team will use their first four preseason matches as heavy preparation for the 2020 season as well as the club's April 7th Open Cup match vs. Western Division Championship side New Mexico United.

Kicking off the 2020 preseason slate is a home match against Charleston, who finished ninth in the East with a goal differential of -2. Greenville's toughest preseason test might be the road match against North Carolina FC, who scored 59 goals last year and only allowing 40.

The question becomes: what is the goal of preseason? To win all four matches or to use these matches to build a deeper understanding of the offensive and defensive shapes that work best as well as which players mesh together, especially in the attack? For most teams, preseason matches are a useful time to prepare for conference play and get comfortable in match situations. Knowing this, it's comfortable to assume matches will be hard-fought, but I won't get discouraged if Greenville doesn't win every match against high competition from the USL Championship clubs.

Greenville's success last year is a large reason the door is opened to play three different USL Championship squads. Win or lose, these matches will prepare GTSC for their second League One season and will serve as a marker leading into April 7th's Open Cup match against Western Conference Championship side New Mexico United.

The Triumph kick off their preseason slate on Saturday, February 15th, against the Charleston Battery of the USL Championship. The match will kick off at 3:00 pm at Legacy Early College and is open to fans for only $5.