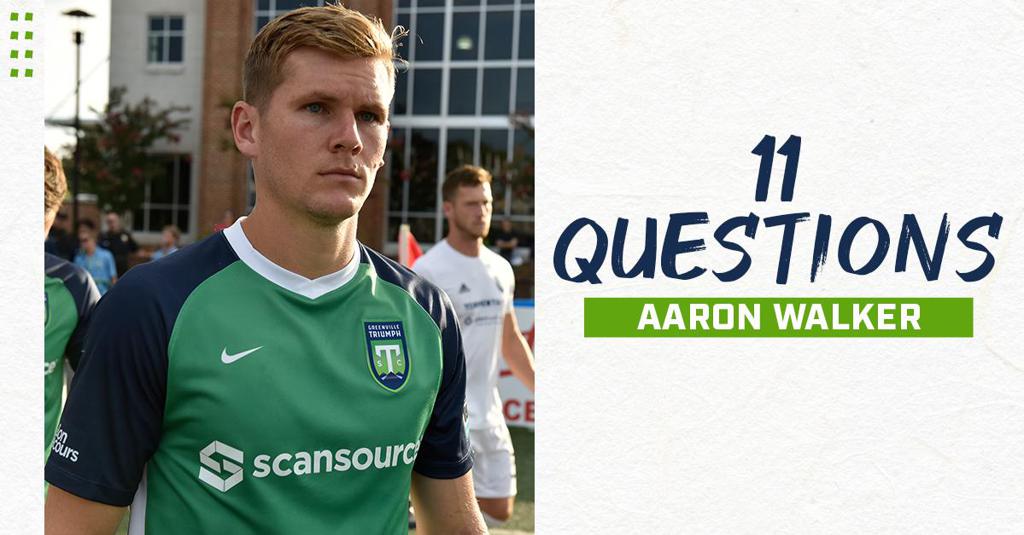 Welcome to 11 Questions -- a new weekly questionnaire series designed for you to get to know the people that make up Greenville Triumph Soccer Club. Each week, our own Marion Cole will ask someone from the organization the same ten questions, but the eleventh question will be from the previous interviewee. With players, coaches, and front office staff involved, we hope to bring you a fun look inside our club!

This week, I'm joined by Triumph Co-Captain Aaron Walker. Aaron was a member of the inaugural GTSC squad and a key midfielder to the club's first-year success.

1. If you had a podcast, what would it be about?

Wow that’s a tough one to start with. I feel like I could go a lot of different directions with this, but something involving soccer comes to mind immediately. I might choose something where I could host different professional players and coaches from around the world to pick their brain and get their perspective on the game and chat about the personal experiences tied to it. Everyone has a different story and different perspective on how they perceive the game and that's something I've always been interested in.

Really, I just enjoy relaxing around the apartment or going to grab a coffee and watch some footy on TV. I keep it pretty low key on Sundays to get prepared for the next week. Super exciting, I know, but it's important to take advantage of the day off and really recover with how much we do during the week.

3. What’s the most memorable meal you’ve ever had?

This is really difficult for me...I am pretty into food! First thing that pops into my head is this seafood dish I had a couple years ago when I was playing in Iceland. It was a tiny little restaurant on the coast near where I lived. It had just a couple of tables, and the chefs only cooked what they caught that day. When they ran out, they closed. Very different than in the States. It was some of the best tasting food that I’ve ever had. Really need to get back and see that country again soon. What a place.

The most nervous I have ever been? Honestly, I think I enjoy pressure. I feel like experiences and situations that make you nervous are also the ones that make you grow the most afterwards. But I do have a reservation to go skydiving at some point in the coming offseason. I've always wanted to do it, and I haven't gotten nervous about it quite yet. But I'm pretty confident in saying that the moment right before I jump will take the cake.

I like to eat pretty clean throughout the week, but at that hour on the weekend? Chances are its something that’s not the healthiest! I don’t buy them super often, but chips of any kind are definitely my vice. My go-to late night cravings is always something spicy or salty rather than something sweet. If you've never had a bag of Doritos Spicy Sweet Chili, do yourself a favor and give them a go. So good.

So, I’m pretty sure this is not a well known fact, but maybe it is and I was just in the dark this whole time. Would you believe me if I told you that clouds, on average, weigh around one million pounds?! Yeah, pretty mind blowing.

7.  Triumph SC announces they’re bringing a celebrity to the next match and wondering if you have enough time to say, “Hello.” Who’s the celebrity you’re most excited to have at a match?

I’ve always wanted to meet the Scranton Regional Manager of Dunder Mifflin Paper Company... Michael Scott. He just seems like such an interesting guy. I've honestly lost count of how many times I've watched The Office all the way through. But like a fine wine, it just gets better with age.

I grew up a big Liverpool supporter. Last offseason I was able to take a trip to Paris and see them play PSG in the Champions League. I've been to matches in Europe before, but something about Champions League was different. The environment was crazy! Truly like nothing I've ever seen.

The Super Bowl would be a pretty cool experience. If the Falcons ever made it again, I would definitely want to go. But let's not talk about the last time they made it. Maybe with Gurley back in Georgia, he'll get a second wind. But with Brady in the division now and Brees still doing well? Yeah. Next question, please.

I'm really okay going in any spot in pens, but I like going first. And if I can't go first, then I probably would choose fourth. As long as I'm taking one, I'm happy and feel good about my chances.

Next week, I’m speaking with your new teammate Abdi Mohamed. What would you like me to ask Abdi?

What is one movie you can watch on repeat and never get tired of?