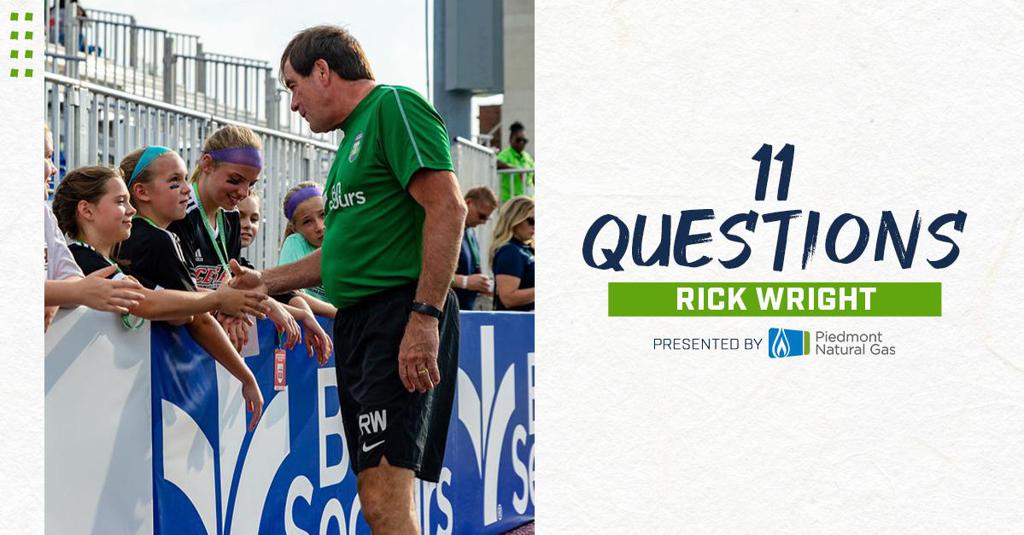 This week, I'm joined by Upstate soccer legend, Rick Wright. Rick came to the Triumph in 2019 with years of coaching experience under his belt, coaching both Anderson University and Erskine College to multiple conference titles. As a player, Rick made appearances on the Bermuda and U.S. National Teams, including a 1976 U.S. Olympic Games appearance.

I would do a podcast that highlights youth soccer development.  First priority would be in the Upstate and then state wide. I would focus on a variety of things, but especially coaching education. Coaches must let the game be the teacher and all the youth and high school coaches need to interact with each other more. The Triumph technical staff would be a great resource for them.

I really enjoy being at home with my wife. We both enjoy cooking and eating. I really enjoy grilling on my deck, listening to music and just chilling. My favorite dish to grill is a Mexican-style beef brisket that is awesome. The technical staff can vouch for that. As far as music, my top three genres, in no order, would be Reggae - Collie Buddz is from Bermuda - 70's music and any song Kenny Chesney sings about relaxing on the beach. You know, I also really enjoy cutting my grass and doing yard work. Cutting grass gives you instant gratification as you see the fruits of your labor.

That is a tough one as I have been lucky to eat in some fantastic restaurants. However, my favorite meals are at home. My wife, Susan, is an incredible chef and has the most amazing ability. She can listen to what I like and then instantly knows how to cook it. Same thing if we're out to eat and have something we love. She already knows the ingredients and can improvise it at home to make it even better. Our Thanksgiving meal is out of this world, but our Christmas meal is over the top. Starts out with She-crab soup followed by a sampling of shrimp and grits with a medium rare beef tenderloin for the main course. The wine pairing is normally either a Malbec or a Carmenere.

Another interesting question. I've been very fortunate to have competed in a couple of World Cup qualifiers for Bermuda, and in a previous life, I sailed competitively for Bermuda. In saying that, though, the most nervous I have ever been is when I got married to my bride of 39 years and the two times I witnessed the births of my children. While I did get nervous when competing, I always had the confidence in my abilities because I was very prepared to perform. With marriage, and especially births, everything was out of my hands. Our first born was an emergency C-section and the most nervous I have ever been.

Very seldom am I up even close to that late, but I would eat whatever was available. If I had a choice it would either be fast food, pizza or a good cheeseburger with a chocolate milkshake. A Philly cheese steak would be a good late-night snack as well.

Nothing in today’s days or times really and truly blows my mind but if I had to pick something it was a couple of weeks ago when the BBC aired the coronavirus situation in Ecuador. It was and is very disturbing. There have been so many under-reported deaths. In fact, in one city, they were burning bodies in the street because their health care system was totally overwhelmed. The official death count was 400. They called the military, and they went door to door and pulled out over 1,000 dead bodies. Enough of that.

Since it is a soccer environment, I would like to see George Best stop in and say hello and also pop into the dressing room to meet the guys. Before hand, I'd want him to wish the guys well. But, now afterwards? That would be a different story. It would be great to get a cold one with him and listen to him tell us about his playing career and personal life. He was such a character and one of the most talented players.

I have witnessed a World Cup Finals and also two Olympic Games, and they are both events that really are special. The Masters golf tournament is also something I feel lucky to have attended several times. My favorite was 1992. Freddie Couples won and I got to go to the tournament with a friend who got the tickets from Brad Faxon, a Furman graduate. It was the Saturday round and we went to the house that Brad was renting to have dinner. And Freddie showed up with his wife at the time. He then went on to win that weekend, and it would be his only Major win.

I would like to go to either a Champions League Final or maybe an English FA Cup Final with Manchester United against Liverpool. Those atmospheres always appear to be extraordinary.

Without a doubt the fourth spot.  It is the most important spot.  If you wait till fifth you might not get the chance to go but fourth normally either wins or extends it for your team. I enjoyed pressure. I think it's what separates good players from great players. In saying that, I was always very prepared to play. As the saying goes, "Fail to prepare and prepare to fail."

11. Our Merchandise Manager, Cory Elwood, wanted me to ask you, "If you could ask advice from any historical figure, who would it be and what would you ask them?"

I can think of a lot of people to sit down with and pick their brain as to why and how they achieved the things they did. But I think sitting in on the meetings of when the Declaration of Independence was written and, then also when the Constitution was written, and then traveling through time as the person that says, "Wait a minute! I was there." And then explain what the intent was to everyone.

Next week, I’m speaking with former Loudon United player Noah Pilato. What would you like me to ask Noah?

Firstly, let me say that I think Noah is going to be a great addition to our program when we get started again. He was making great strides when this came to a halt but John and Alex and Ryan have been great in keeping the culture good and the boys engaged. My question for Noah is two-fold. What are your aspirations in your professional soccer career? What is the best goal you have scored as a pro?