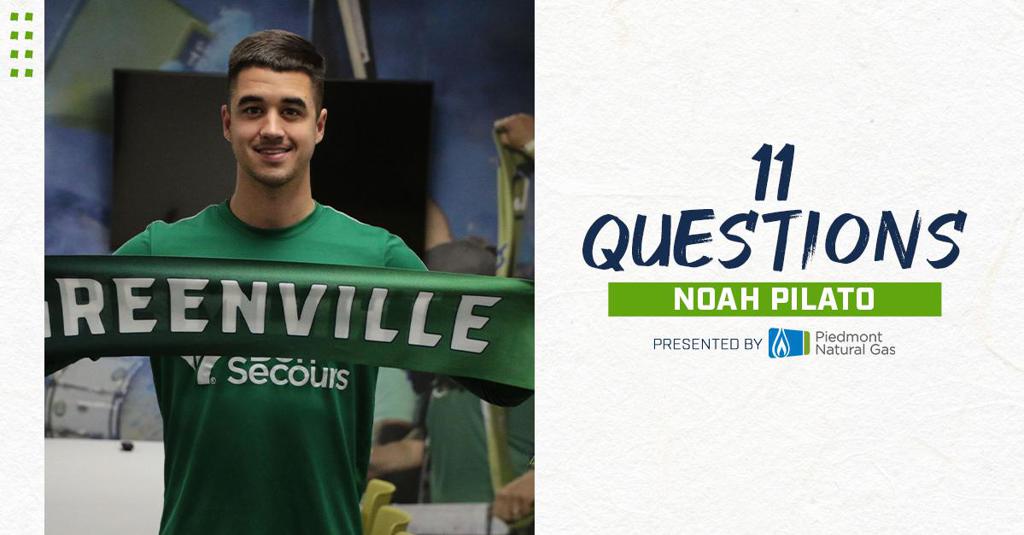 If I had a podcast, it would be an unfiltered version of my soccer journey. The ups and downs, the positives and negatives. I would talk about my youth experience with D.C. United Academy and then dive deeper into my college/pro experiences. Talk about my amazing four years at Penn State and how one of the beauties of college sports is being able to represent something bigger than just you and your team. You have a whole campus, city and alumni base to represent and that really puts things into perspective. Professionally, I would talk about my rookie season with Loudoun United in the USL Championship. I had a roller coaster of a year there, in the sense that I was training with D.C. United, which is an MLS Affiliate, and I was playing essentially every role on the team from a starter to a reserve. It was a great learning experience, and I would enjoy talking about all the mental hurdles involved and how to properly deal with them. As athletes, we're often taught to fixate on the positives and mask the pain, if you will, whether that be physical or mental. I, well, really the majority of players who play at a highly competitive level, have dealt with both of those categories of pain, so I think it's important to relay that message to younger players.

After a long week of training, I love to play Call of Duty Warzone on Xbox with the boys. You know, I've got to say...there's something about throwing on that headset, preparing the platoon, and heading out onto the battlefield. We have this universal understanding that it is our duty, our priority, to kill all the bad guys and return home with a first place Victory Royale. Getting that comes down to good communication and a willingness to revive fallen soldiers in tough times. Our squad displays these qualities to a "T."

It is tough for me to choose one most memorable meal. I come from a big Italian family where all of the meals are homemade with fresh ingredients and have multiple courses. Led by Nonna, my grandma, all of the meals that are made on holidays are unbelievably well-done and really special. There's typically some Chicken Parmesan, pasta with pesto, meat sauce or marinara, cauliflower fritters, muscles, salmon, salad - and most importantly, wine -  laid out all across the entire table. To be able to share an amazing meal with family is memorable every time. So yeah, I really can't choose just one specific meal.

The most nervous I have ever been was my professional debut for Loudoun United in 2019. It was our club’s inaugural match and we were playing away to Nashville SC in their home opener. Nashville was a powerhouse in the Championship, and they were going into the MLS the following season. There were about 8,000 fans at the game, and my family had made the trip from D.C. I didn't start the game, and time goes by very slow when you’re on the bench. I really wasn't sure if I would go in or not which made time go by even slower. But it gets to be the 70th minute, and I hear coach call my name. My stomach dropped. There were just so many emotions going through my head as I got my shin guards on and walked up to the half-field line. But as soon as I stepped onto the field, all of that went away. It’s a crazy thing about soccer, you know, sometimes you may have trouble sleeping the night before or eating a pregame meal because your emotions are so high. But the second you step on the field, everything is alleviated, and it turns into just another day at the office.

This is very dependent on the circumstance. In college, if I had potentially enjoyed a couple of beverages prior, you would find me first in line at Taco Bell with a receipt stretching out the door! If I'm up at 2AM now, I'm either eating taquitos or Half-Baked ice cream from Ben and Jerry's.

I learned that the quietest place on earth is an anechoic chamber at Orfield Laboratories in Minnesota that is so quiet that the longest anybody has been able to bear it is 45 minutes. They say that you can hear your own organs working inside your body, and that it's so silent that the background noise measured is actually negative decibels. I'm not sure how or why that chamber is any quieter than my own room when I turn everything off, but that's probably why I work on a soccer field and not in a lab...

Margot Robbie without any hesitation at all. A queen amongst the peasants... a true goddess amongst us mortals, belonging at the top of Mount Olympus. Honestly, there are not even words that can do the justice of properly describing her. And I'd definitely try and find some way to talk to her. Potentially have a pull up with a slight hamstring injury? Maybe in warm ups, and just talk to her in the stands for the rest of the night.

The most memorable sports moment in my life was watching the Washington Capitals beat the Vegas Golden Knights in the 2018 Stanley Cup Finals for the first Stanley Cup in franchise history. Being from the D.C. area, I'm a huge Washington sports fan. Sadly haha. The Redskins and the Wizards love to break my heart, but the Capitals and Nationals have brought hope back into our lives. But my family has had Capitals season tickets for 20+ years, and we're all die-hard hockey fans. We went to every home playoff game in their Stanley Cup run and were actually in Capital One Arena back in D.C. for a game five watch party. The Caps beat the Knights 4-3 and brought Lord Stanley’s Cup home to D.C. Watching the Nationals win the World Series the following year was also incredible, but the Caps have a special place in my heart.

I would love to go to a Merseyside derby game at Anfield. That derby is between Liverpool and Everton, which are the top flight clubs in Liverpool. With it being the longest running derby in top-flight English football, there's so much history and passion in that game. I can only imagine that the atmosphere would be unbelievable. I've been a Liverpool supporter since the heroic comeback in their 2005 PK shootout, Champions League win over A.C. Milan. But I have never had the pleasure of watching their football in person.

I would take the fifth penalty because, I mean, I'm Mr. Reliable. I can proudly say that I have rightfully earned that nickname through my 0/2 penalty record haha. Both misses as the fifth taker and losing my team the game. But but but... that was in youth soccer, and I haven't missed a penalty since. Have I taken one since then? That detail is really neither here nor there, but just know that if that fifth penalty ever rolls around again, Mr. Reliable will be ready to step up!

11. Assistant Coach Rick Wright wanted me to ask you two questions: "What are your aspirations in your professional soccer career? What is the best goal you have scored as a pro?"

My aspirations for my professional soccer career, on a broad term, are to simply represent myself and whatever organization I am a part of in the best way possible. I know the positive impact I am capable of bringing to a club on and off of the field, and I will be grateful for that opportunity as long as it may last. The fragility of our sport is a reason why I could never take a second of my time as a pro for granted. To be able to use the words "love" and "passion" to describe your profession is a special thing, and I realize that. So I'll try and ride this out as long as my body will let me. But on a more specific term, I would love to be a part of a championship winning team, and I think I've landed at the right place for that.

The best goal, and only goal, that I've scored as a pro was for Loudoun United last year against Charlotte Independence. We were down 0-1 at half, and I scored about 45 seconds into the second half to knot the game up 1-1. The ball was crossed and cleared to the top of the box, and I was making a late run. Smashed one from about 28 yards out. It took an absolutely massive deflection that sent the goalie the wrong way, but my original shot was going on target so I was credited with the goal. The game was also on Mother’s Day and one of best friend’s moms came to the game. So that was a special moment on top of scoring for my own mom.

Next week, I'm speaking with team co-captain, Tyler Polak. What would you like me to ask Tyler?

Ask him what kind of shampoo and conditioner he uses..... I'm messing, kinda, but I'd like you to ask Tyler, "What advice do you have for younger players trying to have a long careers?"