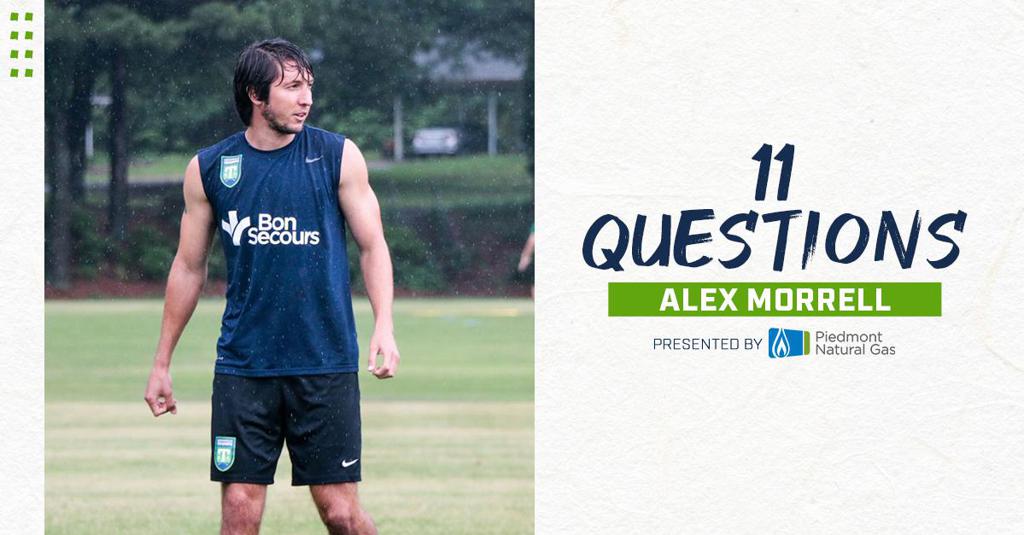 This week, I'm joined by the speedy attacker, Alex Morrell. Morrell, USL League One's first-ever goal scorer, has played in all three flights of professional soccer (MSL in 2016, USL Championship in 2017 and 2018, League One in 2019). The Lakeland, Florida native scored four goals with three assists with Tormenta FC before joining the Triumph following the 2019 season.

If I had a podcast it would be a very similar style to The Joe Rogan Experience. I'd want to bring in a variety of different guests with experiences and stories. Nothing really off limits. To be more specific though, I would probably stay within the realm of sports, animals and exploring the world.

After a long week of training, I like to decompress by sleeping in first of all. Second thing is making the "Morrell Breakfast Special" which consists of corned beef hash, eggs over medium, spinach, avocado and buttered toast, all perfectly paired with a glass of OJ. Then, I typically will find somewhere to either fish, bike, hike or just adventure and be outdoors. If I have access to a boat and a lake though, I would skip all of those things and be on that 24/7. I've had the opportunity to live and play in some really cool places so far, and they all have their own unique things. I'm a Florida guy and loved Tampa Bay because I was able to be out on the boat a lot and visit the springs. It was cool being able to explore the place I grew up.

The most memorable meal I have ever had.... I’m going to go with a somewhat recent dish I had called Legalize Marinara from The Pasta Addict here in Greenville. It's a station at Gather. The dish has fresh spaghetti alla chitarra, san marzano tomatoes, fresh mozzarella, toasted reggiano and oil. Yes, those are the exact ingredients from the menu. Truly amazing and comes in a big paper cone.

The most nervous I have ever been would have to be when I was at the 2016 MLS combine. When I was there, I could barely even eat. I'm honestly very surprised that I had enough energy to go out and play. Thankfully, once I got on the field and just touched the soccer ball, all the nervousness went away. I could just play. I had to write a note to myself and read it everyday just to calm my nerves down a bit. I don't mind sharing the note:

"Alex, remember that you are here for a reason. It is an honor to be invited to the combine. All your hard work has paid off, but it doesn't stop. Play your game because your game is beautiful. Family and friends are behind you 100 percent. You are a fantastic player and an even better person. Enjoy every moment while you are out there and motivate others around you. This is the beginning of your life. Just be yourself and play the game the way you have for so many years. Stay blessed up."

Wow, that gave me goosebumps to read again. Something I'll always keep with me. It turned out to be a great experience for me as well.

IF, and I mean IF, I am up at 2AM on a Saturday night, I'm eating Waffle House. No explanation needed. I will leave you with three words: All. Star. Special.

I just learned last night after watching A Bugs Life that the word "Voila" is a French exclamation borrowed into English, meaning something like, “There you are!” or “There it is!” This is hard to explain in an interview, but hopefully you get where I'm going. I just always thought it was "Wallah" or something! Nope. I didn't even have the subtitles on. For some reason, that word popped up on the screen.

I have already met this guy, briefly, once in an elevator when I was in Portland... but I would like a second chance to say, "Hello," to Stephen Curry and chat after the game. I respect the way he carries himself on and off the court. I'd want to talk to him about a lot of things, but I'm most intrigued by his shooting technique. He's the greatest of all time, I'd want to know all the ins and outs.

The most memorable sports moment as a fan that always sticks out to me was a Tampa Bay Mutiny game. They were in the MLS at the time. I had to have been around ten years old. My dad and I were taking the stairs to get to our seats, and we see Carlos Valderrama walking down. So, of course, my dad stopped and introduced me to him. I was so young, I'm sure my dad did all the talking, but who knows, I could have said anything. He had either received a red card or was suspended from playing that day, but I’ll never forget it.

I have always wanted to have floor seats to a NBA finals game. I think it would be really enjoyable to see the game played at that level and at such a close distance to the players. I would definitely talk some crap and have a good time. An ideal Finals match-up would be prime Warriors versus whatever team Lebron was on. Prime Heat would be a good game.

I want to be numéro uno. I want to set the tone and settle the nerves.

11. Your roommate, JJ Donnelly, wanted me to ask you,"What was it like getting drafted to the MLS? Also, ask him how many Warzone dubs he has."

JJ, getting drafted to the MLS was filled with so many emotions. The biggest thing that I took from it was this: I wasn’t even really supposed to be there. I filled in because other people either got injured or said they weren’t going. I took that and used it as a chip on my shoulder to prove that I should be there, and I'll prove it. I went into the combine, and nobody knew my name. Nobody knew the school I came from. When the combine ended, I walked out of there believing that I should have been a top-ten pick. I ended up getting drafted 22nd overall, but you see my point. I can go on and on about the journey during and after the actual draft, but that experience with myself and with the draft will forever be with me. Side note: Is he allowed to ask two questions? Haha. I have a whopping total of two wins, and I am now officially and happily retired from video games.

Next week, I'm speaking with the club's Director of Ticketing, Stacey Wise. What would you like me to ask Stacey?

Stacey, what is one thing on your bucket list that you really want to check off?