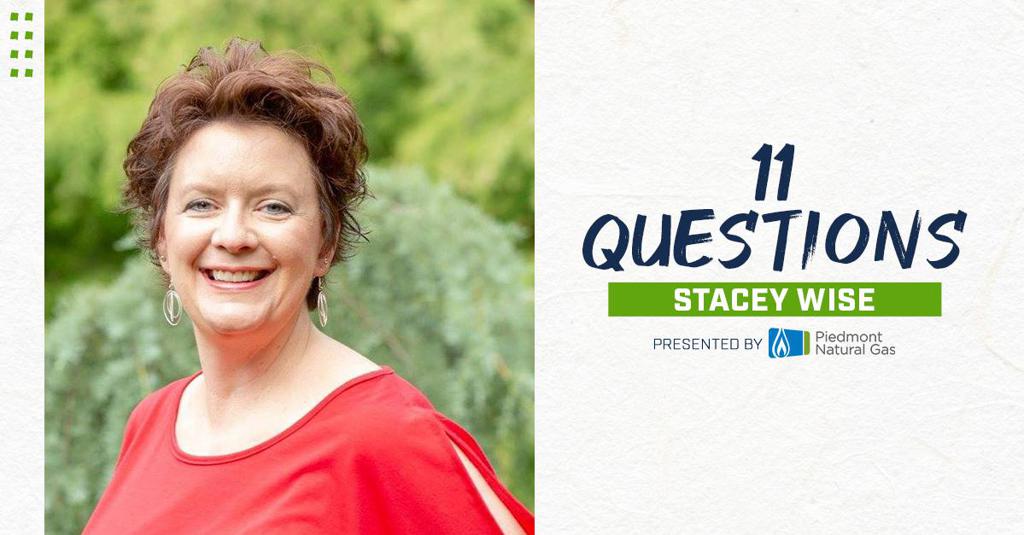 This week, I'm joined by Director of Ticketing, Stacey Wise. Stacey, a life-long Greenville native, got her start in sports with the Bon Secours arena before transitioning into the ticketing office for the Greenville Swamp Rabbits. She's been with Triumph SC since its inception in 2019.

It would be a toss up between reading, sewing and crime drama.  Probably would end up being about crime. I love to watch Law & Order SVU, Criminal Intent, Elementary and CSI. I find it very interesting to watch the way the detectives figure out how the crime happened with all the clues. I think I'd probably focus on murder cases.

I'll make a meal for the family and enjoy a glass or two of wine. We're eating vegetarian right now, so trying to find new recipes has been a fun challenge. My favorite one to make so far has been black bean enchiladas with salsa verde. Then we typically veg out in front of the TV. We've been binge watching the Sopranos while we had free HBO. We also watched it when it originally aired and loved it, obviously. Also just finished the entire run of How I Met Your Mother recently.

It would have to be the meal at the Grove Park Inn in Asheville.  About 12 years ago we took the kids to Grove Park Inn so they could see the Gingerbread houses at Christmas time. We decided to splurge and treat ourselves for dinner at the Blue Ridge dining room with the kids. It was "Grand Buffet Night" where it was anything and everything you could imagine, including a chocolate fountain! It was exciting to share with the family and have a fine dining experience with an eight and ten year old. The best part was Nathan, my youngest, announced on the way to the car that his pants wouldn't stop popping open because he ate so much. Goodness.

26 years ago, the day I got married to my husband, Greg. Having my two kids is a close second. Two different kind of nerves. Getting married changed my life, in the best way, so it's more about that. But having kids, the nerves was more about worrying that they were healthy and the process went smoothly.

I am sorry to say that I have not been up at 2AM in twenty years.  No eating in the middle of the night for me now – maybe some wine, but no food. I have honestly never been a night owl in my life.

My oldest turned 21 years old this year. How can I be old enough to have a kid that can legally drink?! How can I be that old? Time flies by too fast.

I would love to see Billy Joel. We have had the chance to see him in concert several times -- even at Madison Square Garden. That was actually my favorite performance. He only played the hits and sang for three hours straight. I love his music and think he is very talented. And, besides, who wouldn't love to see Greenville Triumph on the pitch?

This would have to be when I won a gold medal in the Junior Olympics at age 15 for synchronized swimming. Shocking, I know. You don't find many people that do synchronized swimming, but around age nine, my mom was looking for something to keep us active because we had taken all of the swim classes that were available. We were at the old YWCA downtown and they had started a synchro club, so we joined. It was the only club in the state!

I would have to say the Summer Olympics. It would be exciting to see the level of athletes that compete. And if it could be in Italy, that would be an added bonus. I think the Opening Ceremonies would be fun, but I want to see Italy very badly!

So, I never played soccer. Not even growing up. But both my kids and my husband played, so I've attended more games than I can count. And watching the PK's for my son, Nathan, I always wanted him to go second or third. Right in the middle to pump up the team or leave room for someone else to score. So that's where I'd choose.

11. League One veteran and Triumph newcomer, Alex Morrell, wanted me to ask you, "Stacey, what is one thing you really want to check off your bucket list?"

I would love to swim with dolphins. When I was growing up, we were at the pool all the time and swim team practice was four days a week. I always wanted to train dolphins. That was until I learned how many science classes were involved with marine biology...Took that career path right off the table.

Next week, I'm speaking with Goalkeeper of the Year, Dallas Jaye. What do you want me to ask Dallas?

What kind of music do you listen to before a match?