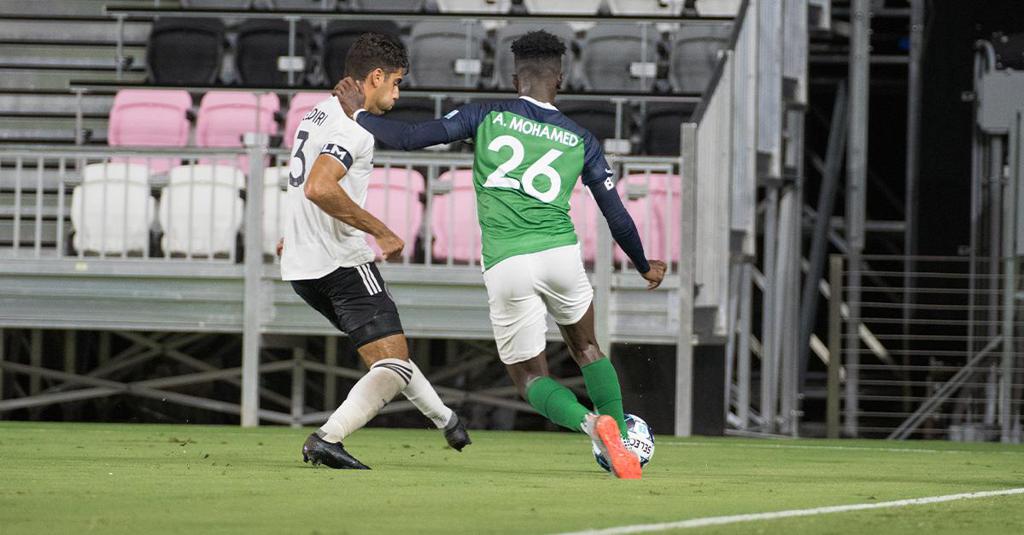 Greenville, SC - The 2020 USL League One regular season began with a Greenville Triumph victory, as the club defeated David Beckham's Fort Lauderdale Club de Futbol at Inter Miami Stadium by a score of 2-0.

The match began rather uneventfully as both squads struggled to maintain possession after returning from over 200 days without regular season matches. The pace slowly picked up throughout the first half with Fort Lauderdale and Greenville seeing several set piece opportunities early on. In the 22nd minute of action, Dallas Jaye proved why he was chosen as League One's 2019 Goalkeeper of the Year, coming up with a double save just inside the six yard box to keep the match at 0-0.

Settled into the match and struggling to deal with the crafty footwork of the Fort Lauderdale attack, Greenville began to push offensively when Alex Morrell connected with Jake Keegan from the endline, missing the near post by inches. After a battle won in the midfield, co-captain Aaron Walker sent a long ball in stride to the speedy left winger, Morrell, who with an unwavering composure, would deliver Greenville its first goal of the 2020 season as the club would head into the locker room with a 1-0 lead.

The Triumph momentum continued into the second half when the team's leading goal scorer from 2019 found his first goal of 2020, connecting once again with an Alex Morrell service in behind the Fort Lauderdale backline. The diving, near-post header from Keegan would be the insurance Greenville needed as the Triumph held onto the 2-0 lead through the added five minutes of stoppage time and tallied their first three points of the League One season.