Triumph SC stays atop the leader boards with win over Richmond 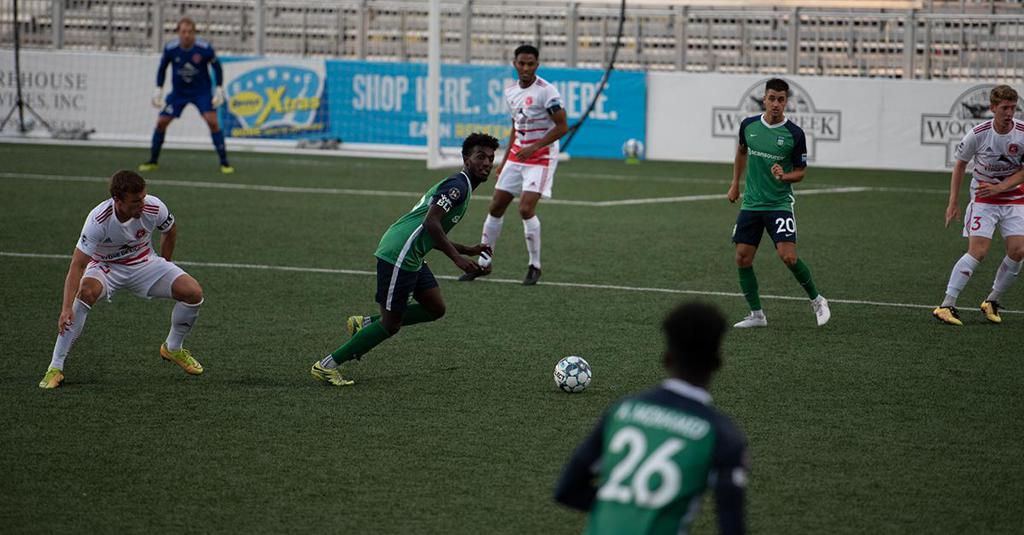 Greenville, SC - A long-awaited Saturday night in the Upstate did not disappoint, as Greenville Triumph opened their home campaign with an exciting 3-2 win over the Richmond Kickers, marking the first win of the 2020 Bon Secours Cup series.

The Saturday night match began with a hyper, yet uncontrolled energy, as both clubs searched for a steady rhythm in possession. Greenville looked for opportunities to build out the back before breaking through in the 20th minute. In a push of pure effort, Jake Keegan found the back of the net to put the Triumph up 1-0 and tally his second goal of the 2020 season.

In quick response and an unreserved energy, Richmond answered with a goal of their own in the 35th minute when forward Matt Bolduc was sent blazing down the left flank, finding the back post and sending both sides back to the locker room knotted 1-1.

An exciting second half started in similar fashion to last weekend's 2-0 win over Fort Lauderdale when Greenville struck first after a goalkeeping error by Richmond's backup GK, Matt Broommall. With tight pressure from winger Omar Mohamed, the 15-second score was credited as an own goal by Richmond defender Ian Antley. Greenville has now scored in the first three minutes of second-half action two matches in a row.

The Triumph offensive efficiency continued when Jake Keegan found the back of the net once again in the 69th minute of action, serving up a composed and cheeky finish after connecting with a perfectly placed back post service from Triumph captain, Tyler Polak.

With the game's pace only increasing as the minutes ticked closer to 90, Richmond responded once again in quick fashion, scoring a goal of their own to stay within a one-goal deficit. A chance to tie the game at three on a free kick awarded just outside the top of the 18 yard box came for Richmond after a red card was issued to Triumph defender Brandon Fricke. The 3-2 lead and final 10 men proved enough through the extended six minutes of stoppage time as Greenville earned a hard-fought win in an empty Legacy Early College Stadium.

"Richmond is a team that always comes to compete. In hot conditions and only the second game of the season, with no one being in peak condition, we're looking to our guys to fight through. And with ten men," said head coach John Harkes. "Sometimes you have to grind out wins, and we want to learn from these mistakes, but we want to move forward."

The 2019 League One finalists will hold the top spot in the League for a second week in a row, traveling to face Forward Madison next Saturday before returning to the Upstate for a three-match homestand. Forward Jake Keegan now leads the team in goals and points with three and six respectively.