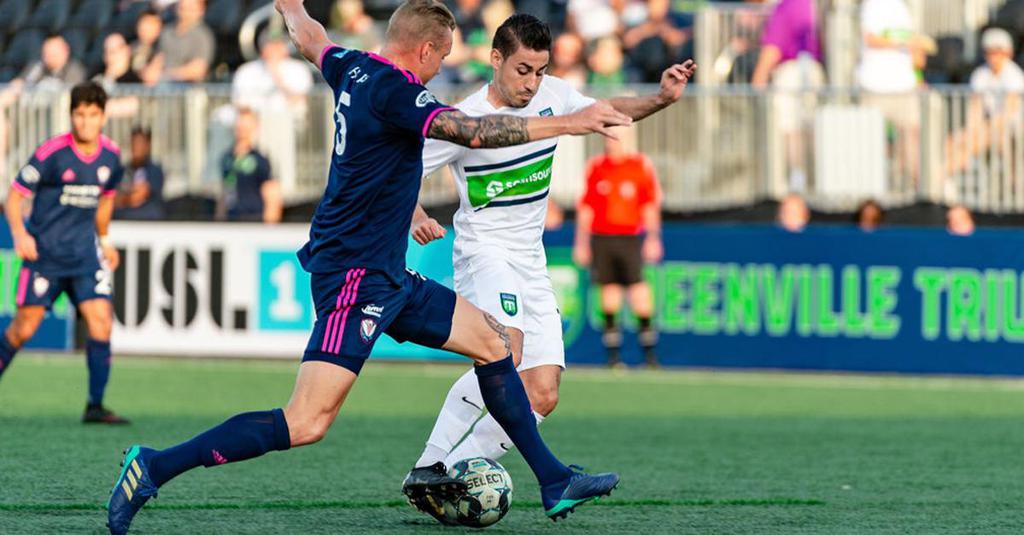 GREENVILLE - It's week four of the 2020 season, and it's time for a midweek clash between the top two clubs in the League One table. No. 1 Greenville Triumph and No. 2 South Georgia Tormenta face off Wednesday August, 5th at the Triumph's home stadium (presented by Lloyd's) for rights to sit at the top of the table.

The match favors the Triumph, who have never lost to Tormenta at Legacy Early College (1-0-1) despite losing twice last season when playing at Tormenta's home field (0-2-0). With a win, however, South Georgia can end the Triumph's undefeated run to open 2020 and give the league a new team perched atop the table. And with a most-welcome Greenville Triumph victory, the Upstate club will even the overall series with Tormenta at two wins a piece and extend their reign for yet another week.

In regular season play, Tormenta remains undefeated against the Triumph. Many of the players from 2019 remained members of the South Georgia squad, including midseason GK of the Year Pablo Jara, who appeared on eight League One Save of the Week titles.

Tormenta also returned dominant midfielder Marco Micaletto, who appeared on L1 Team of the Week six times and led the team with eight goals in 2019. Tormenta's Nil Vinyals, who has scored Tormenta's last two goals, comes in as reigning Player of the Week. Paired with former Tucson forward Devyn Jambaga, who tallied five goals last season and proved to be a handful for GTSC, the Tormenta attack will be the toughest test Greenville has faced this season.

What to watch for

More of the Same: Number one, number two. Five goals, four goals. Two clean sheets, two clean sheets. 18 shots on target, 22 shots on target. Defensive duel success rate: 45%. When put on paper, the two clubs are very similar. Both teams are also full of L1 veterans from last year. For Greenville, names that come to mind are Jaye, Keegan, Walker, Morrell, Polak. For Tormenta, it's names like Jara, Rowe, Micaletto and Jambaga. The biggest difference on paper is the goal success rate with Greenville, taking 36 shots so far with 5 goals for a 17% conversion rate (first overall) while Tormenta has taken a league-leading 54 shots with 4 goals scored -  a conversion success rate of only 10% (5th overall). Tormenta has an upward amount of energy coming into Wednesday's game and plenty to play for, so Greenville will do well to score early and injure the fighting Tormenta spirit that will only grow the longer the match stays knotted at zero.

Conversion: Greenville held the run of the mill for most of the 90+ minutes against Forward Madison, albeit playing not their cleanest match. The club had its chances, tallying 15 shots and taking seven corner kicks. But it happens. And despite the lack of set piece and shot conversion last game, Greenville still leads the league with a 17% goal conversion rate -- a major leap above South Georgia, who only boasts a 10% goal conversion rate this season. The skill from the Triumph attackers is, without a doubt, there, and their movement off the ball has proved very dangerous. The Forward Madison match can be chalked up to a poor game of final third efficiency, but with how well a Harkes-coached club implements training principles into live-game scenarios, the Triumph will be back to scoring goals in no time.

Whole Once Again: The backline looked quite a bit different for Greenville's last game without Evan Lee and Brandon Fricke. In fact, Abdi Mohamed was the only defender playing in his "normal" position. With both Fricke and Lee not available last weekend, Trevor Swartz moved to the left back position and Tyler Polak shifted over to the central defensive position alongside newcomer Cesar Murillo. Despite the changes in front of Dallas Jaye, Greenville's defense didn't miss a beat and turned in the team's second clean sheet this season. If health is not an issue, expect the backline to be at full strength against the Week Four Player of the Week, Tormenta midfielder Nil Vinyals, who scored both goals in Tormenta's 2-0 win vs. OCB.

Tailgate Package: Download the Chick-fil-A app to earn special rewards the Monday after each match. Simply order food from the Pelham Road location, and put Together We Triumph in the special instructions box. For the first four matches of our season, the fan who purchases the most food from the Chick-Fil-A app (using the instructions above) will be named the High Scorer and win a FREE Chick-fil-A Tailgate For 8 Meal. This deal is only available at the Pelham Road location on the Chick-fil-A app.

Merchandise: When the Triumph scores, so do you! Merchandise discounts will be available to fans Wednesday night through Thursday based on the number of Triumph goals scored. One goal = 15% off. Two goals = 25% off. And three+ goals = 35% off using the code: SCORE. Not available on game-worn merchandise or mystery boxes.