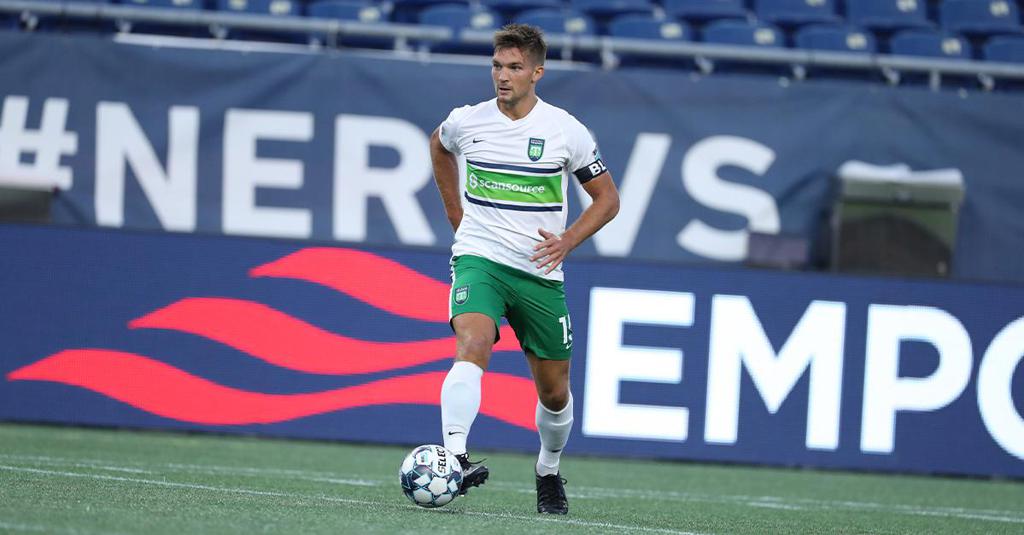 GREENVILLE, SC - The three-match road trip for the Triumph got off to a bumpy start as, six matches and 433 scoreless minutes later, the league-leading side was handed their first loss of the 2020 season tonight by the 11th-place New England Revolution II.

Greenville had the heavy run of possession through the first thirty minutes of the half, playing predominately down the left flank with defender Tyler Polak and winger Alex Morrell. The Triumph pressed numbers forward heavily to get in on the service but struggled to put the final piece together, taking shots from distance that seemed to only find Revs II central defender, Colin Verferth. Clearance after clearance from Verferth bailed New England out of defending Triumph SC's dynamic front five -- a difficult task for any team in the league.

It was clear that Revolution II wanted to stretch the field and catch Greenville low on numbers during transitions, and, although the first half saw mostly Greenville touches on the ball, the most dangerous opportunities came from the Revs II side late in the half. NEII capped off their chances in the extra minute of stoppage time when midfielder Isaac Angking took a shot at the top of the box bent towards the back post. The half ended with a save from Dallas Jaye, six shots a piece and a 0-0 game.

A few halftime changes were made for Greenville both in formation and personnel with Omar Mohamed stepping onto the pitch. Like many other matches this season, it was Greenville acting as the aggressor through the opening minutes of the second half. Just over ten minutes in, though, Greenville was caught in transition down the right flank when Connor Presley connected with Nicholas Firmino who found the delayed, unmarked run by Ryo Shimazaki to put New England up 1-0.

The last opportunity for Triumph SC came in the 95th minute after Polak was fouled five yards outside of the 18-yard box. Midfielder Aaron Walker's free kick was blocked by the Revs II wall just before the final whistle blew. After 95 minutes of action, Shimazaki's clean finish was enough to end Greenville's undefeated streak that spanned across six matches. Though this marks the first week that GTSC did not add points to its' league-lead, the club remains at the top spot with 16 points.

Greenville Triumph travels to Richmond on Saturday for a top-two matchup as part of the Bon Secours Cup. Fans can watch the 6:30 pm matchup on ESPN+.