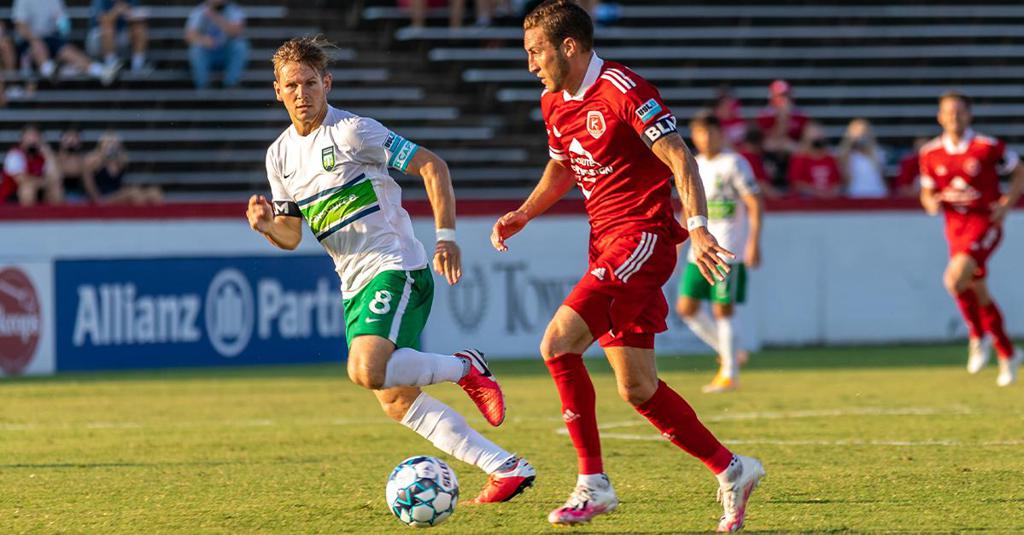 RICHMOND, VA - A highly anticipated, top-two matchup ended as a night of frustration for the Greenville Triumph, as the Richmond Kickers avenged their July loss by downing the Triumph 2-1. After beginning the season undefeated through six matches, the Triumph have now dropped two matches following a loss earlier this week against NE Revolution II.

The match began with something far more important than play on the field, as, alongside the Richmond players and staff, the Greenville Triumph Soccer Club showed seven minutes of solidarity in the push for change and equality within our society by pausing action for the first seven minutes of clock. Both clubs were applauded by their respective fans and front offices for bringing attention and discussions towards a much larger issue.

As the play got underway, the red-hot Richmond Kickers struck just 15 minutes in when speedy winger Matt Buldoc found space down the right flank. Buldoc headed straight for the end line and sent a slot a pass back across the face of goal to the foot of a wide-open Emiliano Terzaghi, who recorded his fifth goal of the season and put the Kickers up 1-0.

Greenville, a club that hadn't trailed in a match before Wednesday, suddenly found themselves facing a deficit for the second straight match. Despite that, they responded quickly with a goal of their own after Brandon Fricke capitalized on a corner kick for the Triumph's first set piece conversion of the year and the Triumph defender's first goal of the season. Fricke's goal gave Greenville a bit more confidence on the ball as the team settled into their second match in four days. Carlos Gomez, who scored seven goals in 2019, was inches away from netting his first goal of the 2020 season after a Jake Keegan shot was deflected directly to the foot of the Triumph midfielder. Unfortunately for Gomez, who was faced with an open net, his shot found the body of Richmond center back, Ivan Magalhaes dos Santos as the match remained level at one.

It was looking as if Greenville and Richmond would head into the locker rooms tied at one, but Richmond forward, Ryley Kraft found one last jolt of energy in the 47th minute when he acted as the lone player on the field to follow up a shot off the post. Kraft's goal put the Kickers up 2-1 which marked the first time Greenville would enter the second half down a goal.

The second half looked dreary for the Triumph as the club struggled to create any solid chances around goal, but momentum shifted suddenly in the 73rd minute after Richmond's Ian Antley was issued a red card on a foul against Triumph forward, Lachlan McLean. Despite having the run of the second half and being up a man, Richmond's two first-half goals proved enough as Greenville could not make up the 2-1 deficit and saw their points lead at the top of the table cut to three.

Greenville will look to get back on track and close the three-match road trip with points as they head to Statesboro for with a rematch against rival South Georgia Tormenta FC on Friday, September 4th at 8:00pm.