Greenville widens lead at top of the table 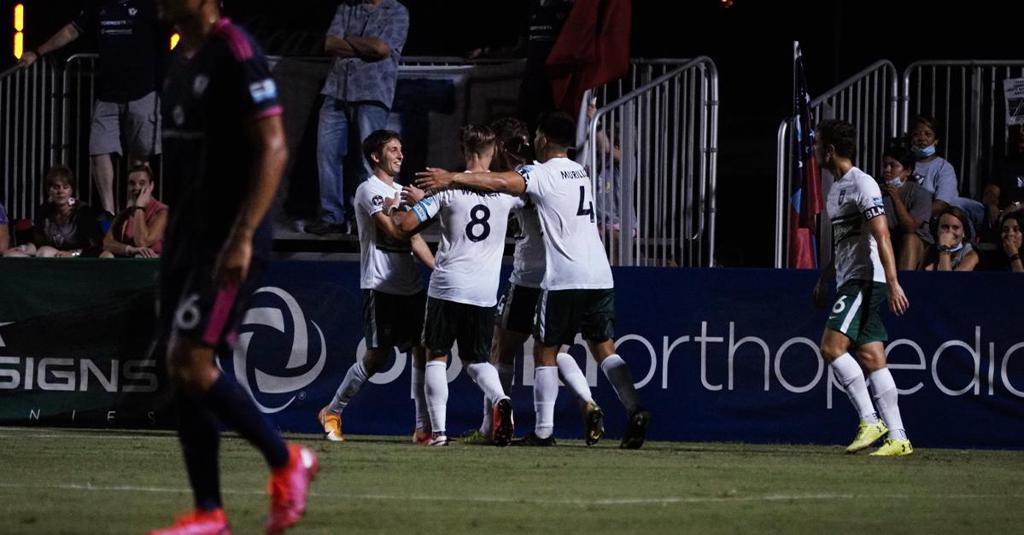 STATESBORO, GA (September 4, 2020) - Greenville was back in proper form in the final contest of a three-match road swing, as the league leaders rode a fast start to a 2-1 victory over Tormenta FC Friday night at Erk Russell Park in Statesboro. The league-leading Triumph rebounded from consecutive defeats to widen their lead at the top of the table to six points.

A key component to Greenville's training the past week had been efficiency in front of goal, and the Triumph saw the fruits of their labor quite early in the match with a goal in the 13th minute by Aussie striker, Lachlan McLean. The goal started with a calm, yet purposeful buildup out of the back that found space through the gaps to winger Alex Morrell, who had tucked in slightly from his normal winger position. Decisively, Morrell turned and sent a perfect long ball into the run of McLean who, after a quality first touch, found himself 1-v-1 with Tormenta GK Pablo Jara and buried it to put Greenville up 1-0.

McLean returned the favor to Morrell in the 36th minute of play when when he found the former South Georgia forward in free space at the top of the box. After combining with Morrell to get endline, McLean sent a final ball across the face of goal, and Morrell did not miss his opportunity to put the Triumph up 2-0 and net another goal at Erk Russell Park.

Tormenta gave its fans a moment to cheer after the second half hydration break when substitute Jad Arslan beat Dallas Jaye on a near post strike from the top of the box and found the back of the net. His goal cut Greenville's lead to one and went in the books as Arslan's third goal against the Triumph.

Greenville held strong during the momentum shift after Arslan's goal, rebounding and turning in a strong 90-minute effort that quelled any concerns about the defense coming out of their loss at Richmond. The performances was highlighted by a highly anticipated matchup between wide players Tyler Polak and Marco Micaletto. Micaletto has been the only consistent offensive threat for Tormenta, but was subdued heavily by the Triumph co-captain. Despite a very chippy match, and four yellow cards issued, Greenville held Tormenta to just two shots on goal.

With the 2-1 victory Friday night, Greenville has swept South Georgia for the 2020 season and extended their reign as the league-leaders. The club returns home for its first-ever Sunday afternoon match on September 13th at 3pm against Forward Madison FC.