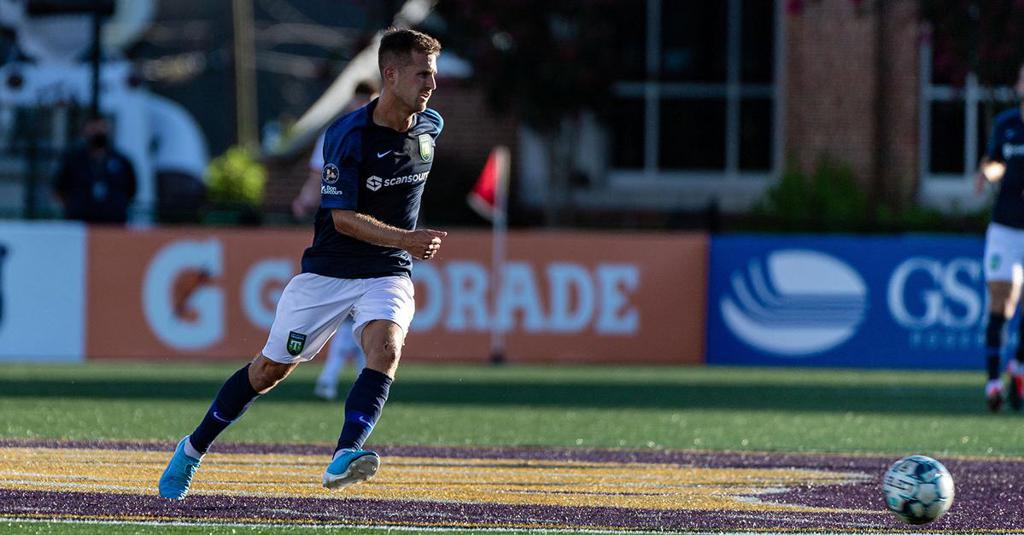 Greenville, SC - An ignited Forward Madison side will make their way to the Upstate for a Sunday showdown against the league-leading Greenville Triumph. The must-see matchup between the best defense in the league and the hottest offense in the league will mark the first Sunday home match in club history.

The two clubs met for the first time this season on July 31st, playing to a 0-0 draw that is the only draw for the dominating Greenville Triumph side thus far (6-2-1). Opening the season with two losses and a tie, Forward Madison has been undefeated through their last four (3-2-2).

Red-hot. The best way to describe a Forward Madison side who has not seen a loss in four weeks. What the three-win Flamingos have seen is a considerable amount of offensive productivity. Madison is hitting their stride at just the right time with the 2020 season hitting the halfway point and the two-team playoff race shaping-up quickly.

Forward Madison is an experienced team that always presents challenges with players like Don Smart, J.C. Banks, Eric Leonard and Vital Nizigiyimana running the midfield. As of late, the Flamingos have been high-pressing teams to create turnovers on the backline. It will be interesting to see if Forward Madison's high pressure withstands for long against a technically clean Triumph defense. If Madison is unable to keep the Triumph midfielders (Pilato, Walker, Clowes) from finding gaps that break pressure, their game plan will have to change.

In the last scouting report on the Mingos, striker Woj Wojcik was a heavy topic as Madison's newest number nine. Wojcik has netted three goals so far, but like Greenville, several different players have made a mark on the score sheet this season. Through just seven games, as opposed to Greenville's nine, Forward Madison has 13 goals and nine assists.

Forward We Go: Lately, Forward Madison has seen success in creating turnovers on the opposition's backline. If you remember back to the Chattanooga game at Legacy Early College on August 15th, that was the first match any team had successfully pressed the Greenville Triumph backline and holding midfielders. Since that 1-0 win, Coach Harkes has made it a point in training to implement a "forward" approach. The most dangerous thing against a high pressing team, besides square passes, is continuously taking touches backwards. More pressure comes, more angles are cut off and that's when the turnovers happen. Through this match, look for Greenville to take more of their first touches forward, getting their heads up to connect through the split-second gaps that will break the lines of pressure.

Contain: It's no secret that the Forward Madison offense has been connected very well through the last few weeks. Keeping tight pressure on the Flamingo midfielders will be a key to containing their explosive offense. Several of the Triumph goals allowed this season have stemmed from transitional moments and a lack of pressure on the ball. Efficient strikers and midfielders need only half of a window to create havoc. With an offense as in-tune and opportunistic as Madison's currently is, Greenville will do well to remember that space does not score goals. Players do.

Momentum Continued: The Triumph's last match against South Georgia Tormenta was perhaps the best collective effort the league-leaders have put together this season, and for the first time, Greenville put two on the board before the halfway mark. Wingers like Alex Morrell were reading the game extremely well, tucking inside the midfield shape of the 4-1-4-1 formation which allowed him plenty of space to drive the attack forward. Greenville's number nine for that match, Lachlan McLean, notched his first start for the club and did not disappoint scoring and assisting in the 2-1 victory. The strong connection displayed between players like Aaron Walker, Morrell and McLean proves the confidence of the Triumph, as a collective unit, is only continuing to build.

Team of the Week: For the second time this season, Alex Morrell was named the League One Player of the week after scoring and assisting in the 2-1 victory against Tormenta FC. Also with a goal and an assist that game, Lachlan McLean was honored with his second Team of the Week selection.

Injury Report: The Triumph continue to be without defenders Abdi Mohamed and Harri Hawkins. Mohamed is sidelined with a foot injury and Hawkins is recovering from knee surgery. Carlos Gomez (shoulder) will also be unavailable this weekend. Midfielder Max Hemmings returned to the field for his first full-contact training session this week, as he nears a return from the torn ACL he suffered late in the 2019 regular season.

Standings: For nine straight weeks, the Triumph have held the top spot in the league with 19 points through nine games played. Greenville is one of just two teams to have played nine matches. Rounding out the playoff cut is Union Omaha who has 15 points through seven matches. Omaha remains the only undefeated team in the league with a 4-0-3 record. Greenville and Omaha won't meet until midway through October for a Sunday afternoon matchup at Legacy Early College. Just below the top two sits Richmond with 14 points and a 4-1-2 record through seven.

Club News: This week, the Triumph announced the signing of former Florida International University midfielder and defender, Andrew Booth. Booth was an MLS Superdraft pick in 2019 and will add tremendous depth to Greenville's midfield roster. Read about his collegiate career here. In addition, the Triumph have released a statement regarding societal issues and unity. You can read the statement here.

Greenville and Chattanooga will meet for the second time this season next Saturday, September 19, at CHI Memorial Stadium. That match, like this Sunday's, will be broadcast locally on the CW62 as well as nationally on ESPN+. Rounding out the month of September, Greenville will return home for a highly anticipated rematch against the defending 2019 League One Champions, North Texas Soccer Club. The two sides have not shared a pitch since the Triumph's 1-0 loss in the 2019 League One Final.

Item of the Week: It's scarf season! This week shop traditional Triumph knit scarf for only $14.99. Shop here.