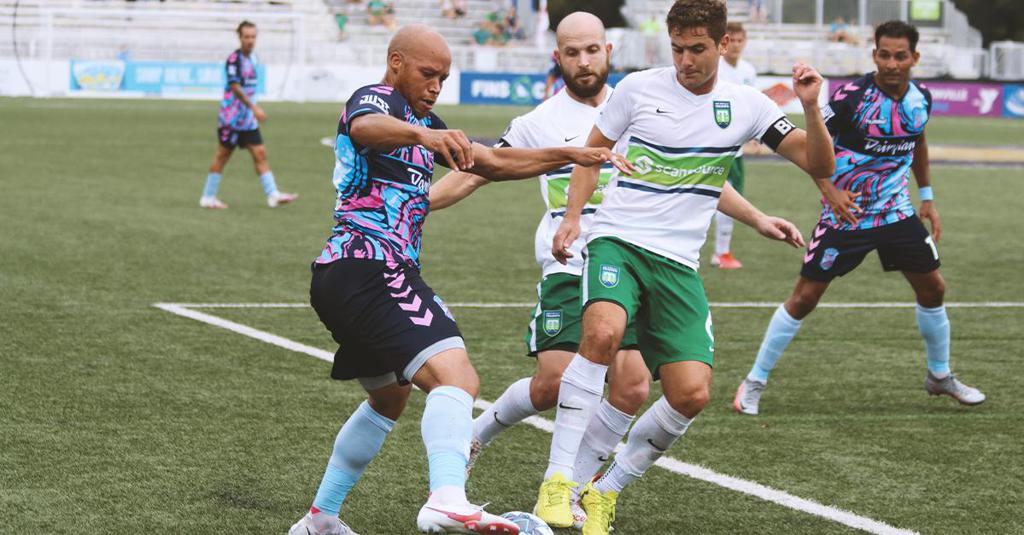 Greenville, SC - After 12 goals in four games, an explosive Madison side was silenced by the league-leading Greenville Triumph in a 2-0 victory at Legacy Early College. Striker Lachlan McLean scored his third goal of the season and forward Jake Keegan extended his reign as the team's points leader as the club extended their unbeaten streak at home in 2020. This afternoon's win will also extend Greenville's reign at the top spot for ten weeks straight.

The game began on a quiet and cloudy Sunday afternoon as the Triumph stepped onto their home pitch for the first time in three weeks. In a rivalry as pronounced as Madison vs Greenville, fuses were short and physicality was high. The first twenty minutes were spent in a chaotic state for both sides, with a lack of anticipation from the Triumph attack. As the dynamic front-three of Morrell, Mohammed and McLean began to focus on driving the game forward with positive touches, the Greenville side began to see moments of brilliance. In the 25th minute, Somalian national, Omar Mohamed, delivered a service into the box just behind the run of forward, Lachlan McLean. With his back to goal and keen awareness of the space behind him, McLean notched his third goal of the season off a side volley to the back corner.

After Greenville went up 1-0, the team established a more consistent rhythm as players began to find much cleaner touches on the ball and make more decisive runs. The pace of pressure from Madison slowed down, but moments before the half’s end, Madison was able to turn split seconds of momentum their way with a quality chance of their own on a low and short range shot that was batted away by reigning Goalkeeper of the Year Dallas Jaye. That save kept the Triumph’s 1-0 lead as the first half came to an end.

Although the chippiness from the first half continued throughout the game, the Triumph began the second half with a much more controlled energy after a few substitutions from John Harkes, Greenville’s attack looked fresh and determined. In the 67th minute, Alex Morrell connected with JJ Donnelly on the back post, as Donnelly's one-touch shot was barely saved by Madison's keeper. Moments later, due to Greenville’s touch-tight pressure, McLean found the end of a Forward Madison turnover and almost collected his second goal of the game after beating the goalkeeper one-v-one. A tremendous defensive effort from Forward Madison kept McLean from finding his first multigoal game.

Ultimately though, Madison's spectacular defensive effort was not enough to keep the Triumph attack at bay when, with ten minutes to go and after a simple layoff in the midfield, Man of the Match and captain Aaron Walker found the run of Jake Keegan at the top of the 18-yard box. Keegan, who hasn’t scored since the 3-2 victory over Tormenta in August, found the back post with ease and composure to give the Triumph a 2-0 lead.

The red-hot Madison side, led by winger Don Smart, was silenced heavily by the league-leading Greenville defense throughout the match’s entirety. In an effort to rest defender, Brandon Fricke, the Triumph’s newest signee Andrew Booth was able to record his first appearance with the club.

Today’s 2-0 win garners Greenville its’ sixth shutout of the season. Madison has yet to win against the Triumph and will have to wait until next year to try again as this Sunday’s match was the final meeting between the two clubs.

The league leaders, now 7-2-1, will travel to Chattanooga for a Saturday match against the Red Wolves at 1:00 PM. The away match will be broadcast on the CW62 as well as ESPN+.

Thanks to Dallas Jaye's clean sheet, you can get $3 off a Top Wash a Fins Car Wash tomorrow!