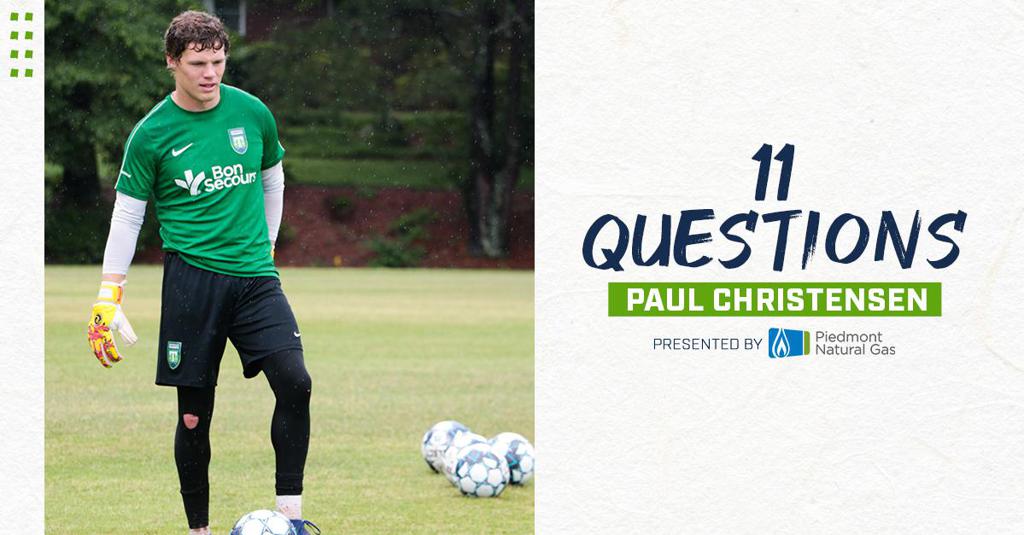 This week, I'm joined by goalkeeper Paul Christensen. Paul is a Woodinville, Washington native and University of Portland alumni, where he was awarded the WCC Goalkeeper of the Year in 2016 and 2017. He joined the Triumph this February after spending his 2018 and 2019 seasons with Atlanta United 2. On May 9th, 2018, Paul made his MLS debut against Sporting Kansas City.

If I did a podcast, it would be one featuring athletes from all different sports. I think talking to them and hearing about their different experiences would be really cool. I also think hearing about their daily routines and the way they approach their sport from the mental side would be really interesting. Faith is also a really big part of my life so talking to other athletes about that would be a lot of fun. I think the "behind the scenes" shows and podcasts are great. There's always so much more for athletes than simply prepping for game day. What people see is often just a small percentage of the work and time that goes into each sport. So I think talking to different athletes, especially ones I’ve looked up to, and adding another perspective for people would be awesome.

I think it really depends on the week, but I really enjoy the outdoors. Going hiking, fishing, paddle boarding. I normally go with my girlfriend, Alex, and her Sheepadoodle dog, Kenan, so it’s always fun getting outside and exploring with them. I also like to read a lot. When we go on road trips I try to finish at least one book on the trip, and being on the bus or plane for a while is a great chance to do that.

You had a three-week road span recently, what was the last book you finished?

I finished three books on those trips. The first was Gospel by JD Greear. Then it was Moneyball by Michael Lewis, and the last one was Thomas Jefferson and the Tripoli Pirates by Brian Kilmeade.

I probably have two and for different reasons. The first was last year. I really enjoying BBQ'ing, and I made ribs for my roommates and me for the first time -- it took like six hours. After bringing them inside, we were so hungry from waiting that we didn’t even leave the kitchen. They were amazing.

Was that because they tasted so good or because you were proud of yourself for making ribs for the first time?

I think it was both. I was pretty excited that I was able to make them. But they tasted really good.

And what was the second meal?

The second was in high school. After church, my family went to Denny’s, and they had their "All you can eat" pancakes. Being competitive, my twin brother and I tried to eat more than the other. We made it to 13 a piece and agreed to a tie because we both felt terrible. I’ve actually never felt worse in my life after a meal, but I’ll never forget that. Worth it.

That’s a tough one. I think the most nervous I’ve been for a game was my first international game with the U17 National team. But in life, it was probably when I backed my dad's truck up into a tree trying to get out of our driveway. But to explain: I had just gotten my license and it was dark. We also live down a gravel driveway that isn’t straight. When it happened, I thought I had destroyed the truck. Luckily it wasn’t too bad.

Easy answer, a Cookout milkshake. And it’s always a mix of Chocolate Chip Mint and M&M.

I learned from Lachlan that in Australian Football if a player is injured, they don’t stop the game. The trainer just runs on the field while the game is still going. I think that’s awesome. We should try it in our games. It would solve a lot of time wasting issues in games.

I really like NASCAR, and my favorite driver is Ricky Stenhouse Jr., so I would probably have to say him. Not only does he have a cool job but he also seems like a fun guy to hangout with. Maybe even talk him into letting me drive his race car. I might tag him in this and try to get him to show up to a game now.

I always love hearing how people become NASCAR fans because it seems that you either love it or hate it. Do you have a specific moment that started your fandom?

It started as a little kid. My brothers and I had a bunch of the little race cars and would watch the races. I wasn't that into it after that for a while. Bu then I went to my first race with my dad and twin brother for our birthday a few years ago. And then getting drafted to Atlanta, there was a race there that I went to and was hooked. I think the more you know about it, the more interesting it is. But with that said, it's definitely not for everyone.

It was probably when I was able to watch my brother, who wrestled for Wisconsin, qualify for the NCAA Championships at the Big Ten tournament. I was able to surprise him there, and it was really cool to see him do well.

I think going to a Stanley Cup Final Game 7 would be awesome. The intensity in those games are incredible. Or I think going to the Daytona 500 or Indy 500 would be really cool. Those are bucket list type of events for me.

You seem to have an interest or a tie to every sport. Other than soccer, can you even pick a favorite to watch?

Yeah, it can be hard to decide, but luckily everything is on at different times. So a lot of the times, it's whatever is on that I'll watch and get into.

First, because after I scored, I could just worry about saving them.

Last week, I chatted with Marcus Siler. He had a very specific question he wanted me to ask you, "Paul, I was in attendance for your MLS debut in Atlanta. I can’t remember, how did that game go?"

Good one... I think the score was the same score as the MLS final that year. And that’s all that really matters Marcus.

For those that don't remember the 2018 Final, it was 2-0 in favor of Atlanta United over Portland.

I'm excited to be speaking with Alex Blackburn next week who is obviously your goalkeeper coach and Triumph's head assistant coach. Paul, what would you like me to ask Alex?

What’s the biggest difference in being a coach in college versus professional? And why did you change from college to professional?