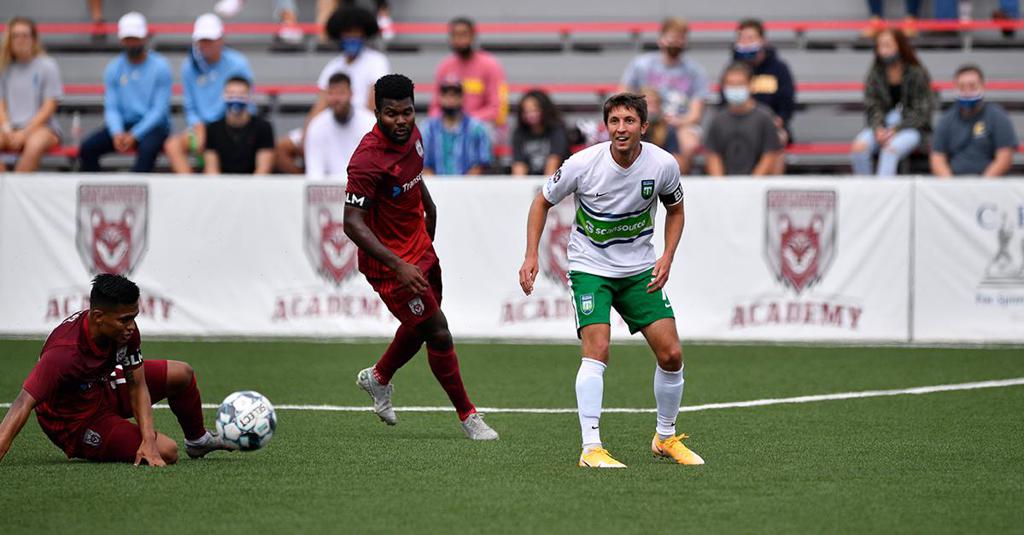 Chattanooga, TN - Led by a late strike from Noah Pilato and an outstanding defensive performance, the league-leading Greenville Triumph prevailed on the road against the second-place Chattanooga Red Wolves in a critical clash for playoff positioning.  A physical match from the start, the contest saw eight yellow cards issued across the 90+ minutes of action as the Triumph earned a sweep of Chattanooga in 2020. With the 1-0 victory this afternoon, Greenville extends its lead at the top of the table to seven points.

The first half was played at a choppy rhythm, mostly due to a large number of fouls issued throughout the first 50 minutes of action. The half saw four yellow cards issued, with two each to Greenville and the Red Wolves. Despite the lack of established tempo, the league-leaders did well to combine through the midfield and break Chattanooga's lines of pressure, which led to several near misses in Greenville's final third. Co-captain Aaron Walker was an instrumental component to working the ball into dangerous spaces early on in the match, including an opportunity in the 20th minute when Lachlan McLean was taken down by the Chattanooga goalkeeper in a borderline foul that saw Chattanooga lucky to escape with a yellow.

Only three shots on goal were recorded during the first half, two for Greenville and one for Chattanooga. That all changed in the second half, as Chattanooga took dominant control of the game's momentum. Before the second-half hydration break had occurred, Chattanooga's explosive offense had added six second-half shots to a lone first half attempt. The Red Wolves were knocking heavily on the door of opportunity as the Greenville back line continued to weather the surge, blocking shot after shot to keep the game level at zero.

In the 83rd minute, it was Greenville combining through the midfield once again to break down the Chattanooga defense and get on the board first. Midfielder Noah Pilato found the feet of striker Lachlan McLean, who had checked off the defensive line, giving him time and space to turn and connect with winger Alex Morrell on the left flank. Morrell wasted no time getting to the end line and found a wide open Noah Pilato positioned well in front of the near post. At an almost impossible angle, Pilato fired a shot over the hands of the Chattanooga goalkeeper for his second goal of the season.

Chattanooga, a team that has scored four times in the last 15 minutes, did not let the 1-0 Greenville lead deflate their home-field energy. In the 92nd minute of the match, it was Steven Beattie who found himself behind the Triumph backline on a short breakaway that was saved in a collision by the reigning Goalkeeper of the Year, Dallas Jaye. That was the last chance the Red Wolves saw as the whistle would blow to signal another Greenville Triumph victory and only the second shutout Chattanooga has conceded this season.

The Upstate club returns home to Legacy Early College on Friday, September 25th, for a rematch of the 2019 USL League One Final. With only five matches left to play this season, the race back to the final is well underway.