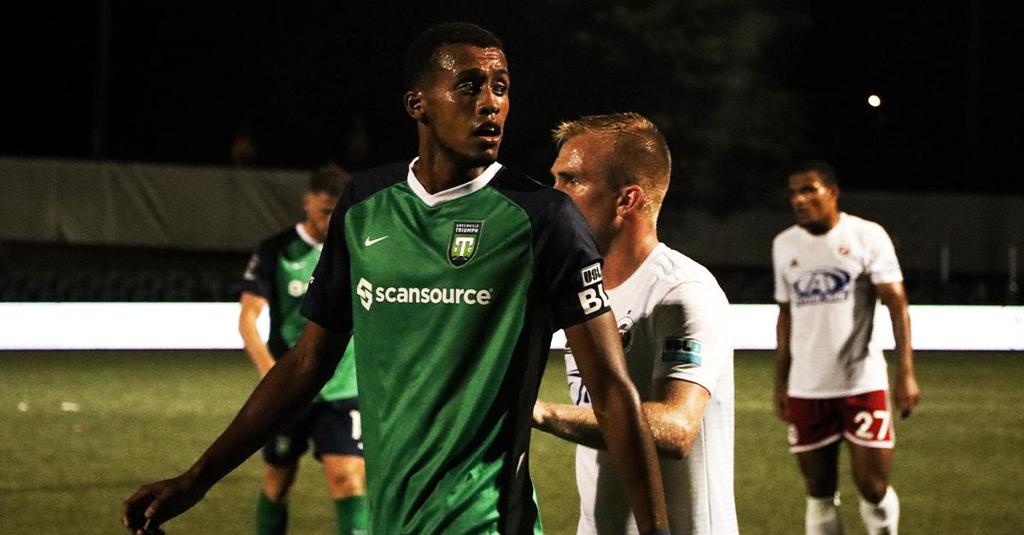 Greenville, SC - Tonight marked the first time North Texas and Greenville Triumph have shared a pitch since the 2019 USL League One Final, and the league-leading Triumph came out on top 1-0 after a late goal from Jake Keegan. Keegan now has a team-leading five goals on the season while Alex Morrell claimed his spot as the league's assist leader.

The quick-paced tempo was heavily established by Greenville's high pressure defending. The Triumph came out in a 4-4-1-1 that saw forward Jake Keegan take on a deeper role underneath the more traditional number nine, Lachlan McLean. Not only did the new formation allow room for all of Greenville's most dangerous attackers to be on the field at the same time, but it also enhanced the Triumph's ability to contain North Texas to one side and win the ball at higher parts of the pitch.

Fresh legs in the first half led to a transitional game full of tremendous recovery efforts by the league-leading defense. In fact, several of those transitional efforts ended up creating dangerous attacking opportunities for Greenville, including a near foul-in-the-box earned by McLean early in the match.

A delayed injury stoppage led to six added minutes in the first half, where Greenville saw the most chances of the entire match, highlighted by a perfectly chipped ball into the box by midfielder Aaron Walker. Walker's pass found the head of leading goal scorer, Jake Keegan, whose header deflected off the crossbar into Lachlan McLean. Unfortunately for Greenville, McLean's second attempt was saved by the NTSC goalkeeper to keep the match in a scoreless tie at the break.

The successful amounts of pressure and winning the ball at key areas did not amount to much for the Triumph, who struggled to put the final attacking moment together. Defensively, Greenville was able to keep the extremely fast and creative North Texas attack, led by Arturo Rodriguez and Ricardo Pepi, out of the score column. Rodriguez had previously been on loan with USL Championship side Real Monarchs while Pepi played with the MLS side on Wednesday night.

The game slowed to Greenville's control through the second 45, as the maturity of the veteran side took command. It wasn't until the 86th minute that Greenville finally broke through, when the league's leading assist leader, Alex Morrell, connected with Greenville's leading goal-scorer, Jake Keegan, at the top of the penalty spot. Keegan's well-struck finish put the Triumph up 1-0 to earn the Upstate club another three points and a week-long extension at the top of the table.

Greenville returns home to Legacy Early College next Friday night, October 2, against Orlando City B at 7:00 PM. Get your tickets here!