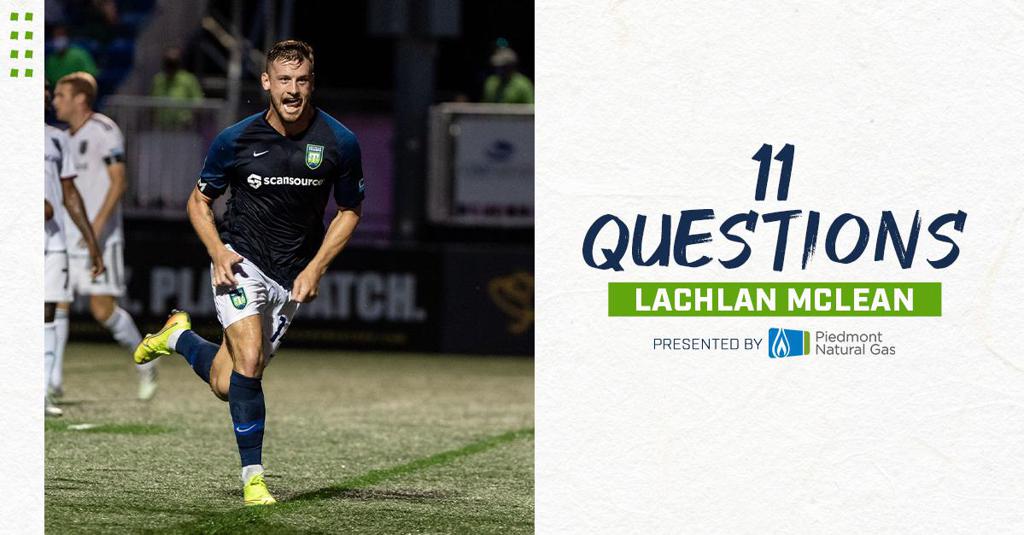 This week, I sat down with Aussie striker, Lachlan McLean. The Sydney native was a standout center forward in the U-20 Premier League in New South Wales before coming to America in 2016 to play for Southern Illinois University of Edwardsville. In his two collegiate seasons at SIUe, Lachlan earned Missouri Valley Conference All-Freshman Team and All-MAC First Team honors with 20 career goals and nine assists.

I think I would do an Aussie perspective of what America is like. I think alot of people don't know what it's like here -- the words you guys say, the stuff you guys do. I'd talk about the misconceptions Americans have of Australians, do some interviews with people.

What are some of the misconceptions Americans have of Aussies?

I've heard kangaroos as pets. I've heard the term "drop bears" used for Koala's because some Americans think they just drop down onto humans. So I think it would be funny to talk about things like that. Would be a good laugh.

If I was at home, I'd go to the beach. There's just something you can't explain or describe about going to the beach after a long day at work or hard training session whether you're just looking at the water or lying in the sand or jumping in to catch some waves. Makes me super nostalgic. If I was here, my vice is watching The Office or Friends. I'd never seen either before I came here. I'd also never had frozen custard before I came here, but that's more of a once-a-week type treat. Vanilla custard with oreo cheesecake.

This is funny. In school, years 10 and 11, we take a camping trip. They force everyone to go on this five-day hike. Sometimes you kayak and sometimes you walk. At that point, I'd never done much cooking in my life. I was in charge of cooking the couscous. I mean, I could barely fry eggs at that point. So they give me a packet of the couscous. I'm trying to figure out how to cook this, and I end up making inedible food. It was revolting. No one can eat it, and it's in this huge tin. Because you're camping, you can't leave it. So the instructor said, "Guys, you either have to eat this or you have to carry it up there." And the way it works is the first couple of days you go down and across and the last day, you go up. And when couscous has all the water weight, it's really heavy. Basically, the only way it was edible was if you dumped this small bottle of soy sauce on, and obviously because I cooked it, I had to use the soy sauce, eat as much of it as I could and carry what was left the next day. I was miserable. That's my most memorable meal only because it was such a fail.

Twice probably. I grew up with three brothers. So I had absolutely no experience with girls until I was 17 or 18. Finally, I met a girl I liked so asking her to be my girlfriend for the first time was awful.

I can't imagine what you'll be like asking a girl to marry you...

Well, hopefully, I'm a bit better now. At that point in my life, I was still trying to figure out what a female was and to figure out how to ask one to be my girlfriend was tough.

What about your other most nervous moment?

Coming here, for sure. Just the thought of knowing it was four years definitely spending most of it away from family. It's not really the culture in Australia to leave. Everyone, especially in Sydney, went to uni together and work there. I had no idea what it was going to be like here. My first semester in college was awful for a few reasons, but the gloss of how fun college was really wore off by springtime. Then I was only able to go back home for four weeks, and I just remember not wanting to come back. But I stuck it out and now I love it here. It worked out.

My favorite thing is kabobs or halals. I'm a big cereal guy too. I love pretty much all cereal. But I'm the kind of guy that will try everything. Right now, my favorite cereal is Lucky Charms. I had a phase of Cinnamon Toast Crunch earlier this year. Sometimes, I'll just go really dessert-y. I had a S'mores one earlier this year as well. But if it's something savory, a kabob.

I'm very new to country music, and I still struggle with Southern accents. So there's this song by Sam Hunt, and I don't even remember what it's called, but I thought the lyric was "body like a back rub" and it's actually "body like a back road." I've been singing that song since I got to America.

If I could just say, "Hello" it would be Rita Ora. I love British accents and she is quite attractive. But if I could hang out with someone it would be Jordan Belfort. I feel like he lived one of those lives that he's got so many stories, I'd just love to listen to them. Obviously, everything he did was illegal and it caught up to him. But the stories would still be fun to listen to.

I got to watch Liverpool play Man United at Anfield. There were a couple of days we were sight-seeing, but I saw that Liverpool was playing, so I went to that instead and sat in the away section. And it was a very small away section. But it was a packed game, and I grew up a Liverpool fan so that was just a generally cool experience for me. I got to see Steven Gerrard score which is incredible, but Liverpool lost. There were a few Liverpool fans in my section, and like I said, we were a tier above the Man United supporters. So the way it works is that away fans have to stay until all the home fans leave. Well, the Man United fans all turned around and all started chanting and singing at these fans who were hardly two feet in front of me. And English soccer fans have a way of making things sound loud and crazy, and I was scared honestly. It sounds weird, but it was a scary moment.

Australian Open or Wimbledon. I love tennis and have always wanted to see Roger Federer play.

One or two, mostly because of nerves. Not sure about one unless I'm really feeling it. I don't really care about scoring the big one. I feel like, as a striker, it's my job to score game winning goals all the time so I don't really care to do that on a PK. So I'll take two. You get it over and done with, less pressure. But that's if I was going to be in the lineup.

If you're going to be in the lineup?

I have a habit of missing penalties, so. We have this thing called the Bronze Boot at SIUe. Back in the 70's, it recorded the largest crowd ever at a college soccer game. So we brought it back for the first time in 15 years and I scored the first goal of the game and was just buzzing. It's like the 90th minute and there's a penalty called, and for some reason, I was chosen as the PK taker. I will never forget missing that one because I'll always be the guy who could have won the game for the first time in 15 years. It was tough.

Assistant Coach Alex Blackburn wanted me to ask you, "Lachlan, what is your most treasured possession. 'My phone' is not an allowable answer."

I don't know about this one. If I have to choose, right now, I have a family photo which I love. But I don't have anything where I'm like, "I need this everywhere I go."

Next week, I'm speaking with fellow Triumph newcomer, Brandon Fricke. What would you like me to ask the center back?

To the big man himself: Do you guys have cake in Ohio? Really would love to know. Also, I heard you're a big golfer. What's your favorite golf club and why?