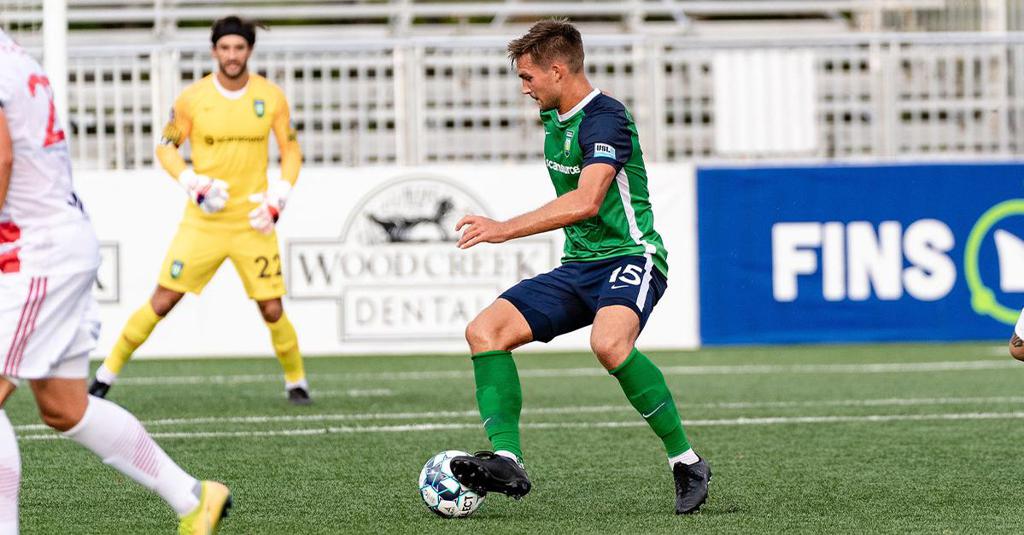 Greenville, SC - This weekend, Greenville Triumph returns to the pitch on which they clinched a spot in the 2019 League One Playoffs after a thrilling 3-2 victory in stoppage time. Now, Greenville will take the field at Kino Sports Complex looking for the right to host the 2020 League One Final.

But before we dive into the "League One Final" scenarios, let's understand this first: Tucson is very good. A much better team than their record shows. They've played the most games of any League One side (14) and are coming off of a shutout victory on Wednesday against South Georgia. They are patient on both sides of the ball and extremely fast-paced. There are also three games still left to be played for Greenville this year. And as John Harkes has said before: no team feels we've accomplished anything and they certainly aren't going to play us that way. All season, Harkes has stressed the importance of focusing on our controllables -- the game or training session at hand -- and the desired results will come. And that performance-oriented mentality Harkes has instilled in his league-leading side has proven to work week after week.

Tucson currently sits at 5th with a 5-6-3 record for 18 points through 14 games played (the most of any League One side). They are a disciplined team defensively and content with letting the ball move in front of them, waiting patiently for a mistake to be made. But they're just as patient on the attacking side of things with a tendency to lull teams to sleep before making the decision to go forward. But when they do go forward, it's quick and purposeful.

As for playoff hopes, Tucson really needed a win last weekend against Madison that ended scoreless. But the Arizona side bounced back quickly, playing again on Wednesday against South Georgia. They won that match 1-0 off a Ramos Godoy goal in the 33rd minute.

what to watch for:

Location, Location: There's no question that this year's travel regulations have been an added challenge for every team. When asked if the travel is a concern, Coach Harkes stated that his team isn't scared to travel but that it certainly adds an extra element and takes extra attention to prepare the body to play at the same level. With a three-hour time difference and a high of 95 degrees on Saturday, the location of this match could play a big role in the Triumph's performance.

Exploitable: While Tucson is disciplined defensively, they have a tendency to leave space on the flanks. Alex Morrell dissected OCB's backline last week, and no matter how disciplined a defender might be, sometimes the attacker is just better. For Greenville, that's been the case for the majority of this season when wingers are put in 1v1 situations. Greenville has the capability to keep Tucson under extreme amounts of pressure given the ability of the Triumph attackers.

Aaron Walker: Co-captain, Walker, is also back after missing last weekend's game with a concussion. Coach Harkes has stated before that the team is simply different with him on the field. Few players can make as much happen as Walker can when he's on the ball. While his distribution is a more noticeable attribute, Walker can strike a ball from distance and is still in search of his first goal of the season. He will be a key player to watch this Saturday

Team of the Week: Three Triumph players were named to League One's Team of the Week (Week 12) after a 2-0 victory against Orlando City B. Scoring the breakthrough goal for Greenville and notching his fourth on the season, Lachlan McLean was chosen for the fourth time this season. After being nominated for Player of the Month, Alex Morrell gave a standout performance against OCB recording an assist and goal respectively. He continues to lead the league with 6 assists on the season. Defender Cesar Murillo also earned a Team of the Week nod after leading all players with three tackles on the day and completed 75% of his passes with 14 occurring in the opposing half.

Leaders: Alex Morrell continues to lead the league in assists with six after connecting with Lachlan McLean on Friday. Adding a goal to his scoresheet, Morrell also took the team lead in points with 12 (3G, 6A). Jake Keegan follows behind with 11 points from 5 goals and 1 assist.

Golden Glove Bobbleheads: Dallas Jaye remains well ahead of everyone in the Golden Glove race with a .46 GAA. Jaye won the League's first ever Golden Glove award and could stand to be first GK to win the yearly honor back-to-back. To celebrate, GTSC is giving away 1,000 Dallas Jaye "Golden Glove" bobbleheads to fans after the October 18th match. Get your tickets by clicking here.

Injury Report: Abdi Mohamed (foot) has returned to practice and will be featured on the 18-man roster this Saturday. Midfielder Max Hemmings continues to participate in full-sided training and will also be a part of the 18-man roster selection this weekend for the first time this weekend. Triumph co-captain Aaron Walker returns to the pitch after suffering a head injury against Chattanooga two weeks ago. Harri Hawkins (knee) has returned to training at a limited capacity while Carlos Gomez continues to be sidelined while recovering from shoulder surgery.

Standings: For thirteen straight weeks, the Triumph have held the top spot in the league with 31 points through 13 games played. Greenville is searching for three points and some help from Richmond to make up the five points needed to solidify hosting honors for the 2020 League One Final. After suffering a huge 4-0 loss to NEII, Richmond bounced back on Wednesday with a 2-1 defeat of OCB to keep them above the playoff cut with 23 points through 12 games played, one less than both Greenville and Omaha. Omaha, on the other hand, takes a dip just below the playoff cut with 22 points through 13 games played. Omaha travels to face Forward Madison while Richmond heads to Globe Life Park for a meeting with the 2019 League One Champions over the weekend. Should Richmond drop any points to NTSC, and Greenville collects all three at Tucson, Greenville will have earned its right to host the Championship match.

Club News: In a partnership extensions with the CW62, Greenville Triumph is excited to announce that the USL League One Final Match will be aired locally on The CW along with matches on October 18th and October 24th. Head Coach John Harkes has been selected to participate in American Cancer Society's Real Men Wear Pink Campaign. You can read about ways to donate and additional initiatives the club is supporting by clicking here. Several weeks ago, the Triumph also released a statement regarding societal issues and unity. You can read the club's statement by clicking here.

Greenville returns to Legacy Early College on October 18th for the final regular season home match at 3pm. Fans can purchase tickets for Sunday's match by clicking here and using the promotional code "JERSEY" for some extra swag included with your ticket purchase. The October 18th match, along with the October 24th match at Orlando City B, will be broadcast on The CW62.

Item of the Week: Pre-order your USL League One Finals t-shirts for only $19.99 here.