Head Coach & Sporting Director to Continue with Triumph Through 2023 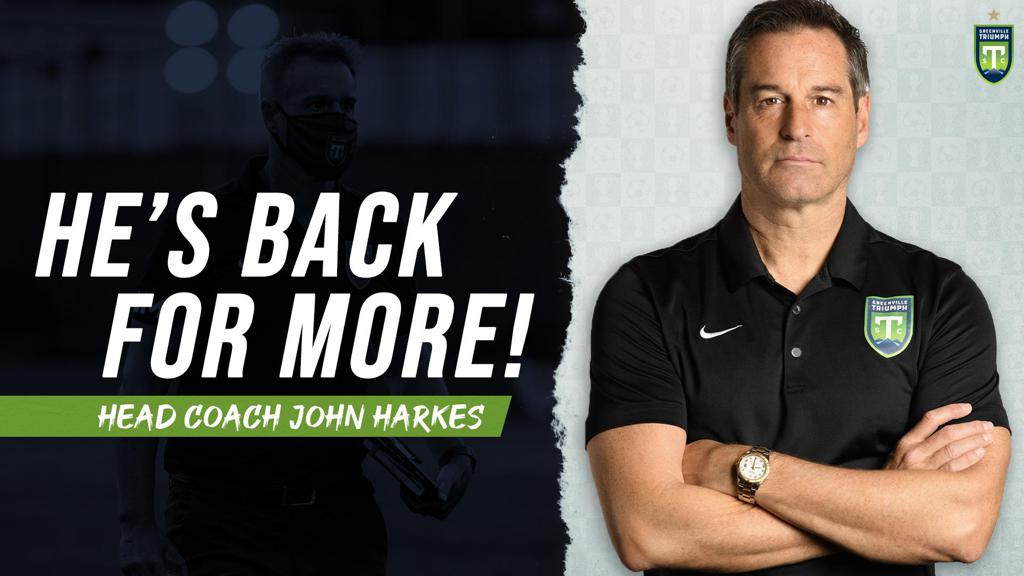 Greenville, SC - The Greenville Triumph Soccer Club has signed head coach and sporting director John Harkes to a multi-year extension. Harkes, recently named the USL League One Coach of the Year following the club's title-winning run in 2020, has been with the Triumph since the club's inception in 2018. The newly-agreed upon extension between the Triumph and Harkes runs through the 2023 season.

"I'm very grateful to the leadership of the Triumph for their belief in me and in the work of our staff and players," said Harkes. "It has certainly been a very enjoyable journey thus far and I'm excited to continue our work building the foundation of this club and defending our title next season. It's important, too, that we keep building our relationship with the fans and the community, and I look forward to continuing those efforts in the years to come."

The former US Men's National Team captain came to Greenville after leading FC Cincinnati to a 16-6-8 record in its inaugural 2016 season. Harkes' impact on the Triumph was felt immediately, as he guided the club to the 2019 USL League One Final in its inaugural season before capturing the 2020 USL League One title following a wire-to-wire run on top of the league standings.

Harkes has amassed a 24-9-13 record through his first two seasons with the club, fielding teams known for stellar defensive play and high-tempo counterattacking style. He will see 14 players from the club's 2020 title-winning team return, with six players entering their third season with the club. His leadership has helped guide many players to the best seasons of their careers, highlighted recently by defender Brandon Fricke being named League One Defender of the Year and goalkeeper Dallas Jaye being named GK of the Year and Golden Glove winner for a second straight year.

”John has done a tremendous job of building this squad from the ground up,” said Greenville Triumph Chairman Joe Erwin. “The credibility he has with players, agents and fellow coaches at all levels of the game has enabled him to put together a roster of highly-talented players who have the character and integrity to match their technical skill. We are excited to continue to build this Club with John overseeing our technical operation and are looking forward to continuing to provide the Upstate with a quality club that competes fiercely on the pitch while also making a significant impact off of it in our community.”

Harkes will lead the Triumph's title defense with a bench full of familiar faces, as the club announced the return of 14 players from the 2020 roster.