The club recently announced Optim Health System as the naming rights partner for the field, which will serve as new economic hub in South Georgia 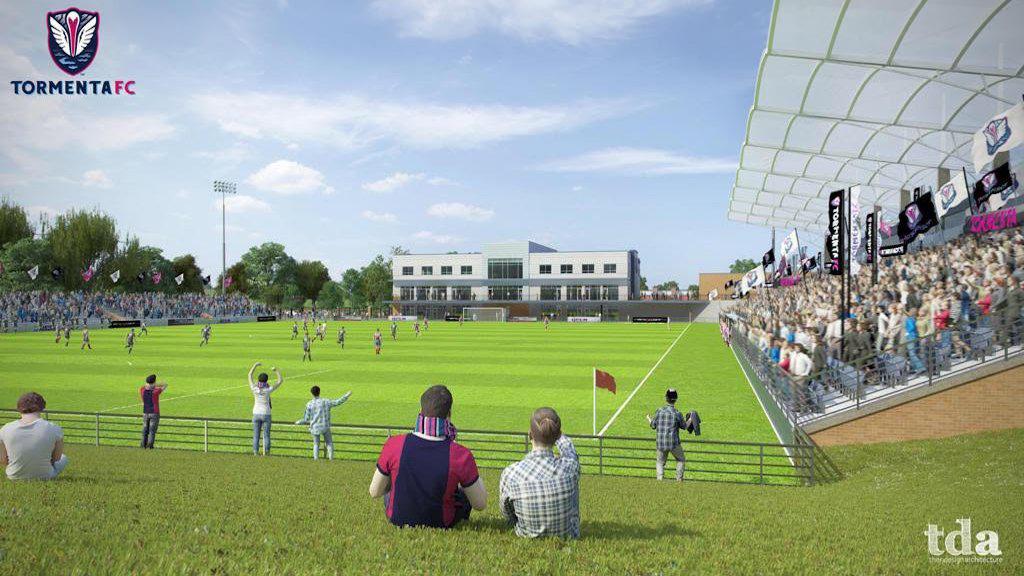 STATESBORO, Ga. - It’s been just over three years since Tormenta FC was announced as the first founding member of USL League One, and ever since that day in 2018, the club has made strides not only toward growing the game of soccer locally, but toward making its community the preeminent sports tourism and entertainment destination in south Georgia.

The development of a new, 5,300-seat stadium is a major part of the club’s plans, and that development took a big step forward last week when Tormenta announced that longtime club partner Optim Health System had secured the naming rights for the playing field at the new stadium.

“Both Optim Health System and Optim Orthopedics have been phenomenal partners of Tormenta FC since our humble beginnings in 2015, and we’ve grown tremendously together over these past five years,” said Tormenta FC Owner and President Darin Van Tassell. “They continuously provide our pro athletes with the best athletic trainers and rehabilitation care in their times of need and with preventative care throughout the season, and a special thank you to Dr. Don Aaron with Optim Orthopedics, who has been a critical part of the Tormenta FC staff and family.”

Due to open at the start of the 2022 League One season, Tormenta’s state-of-the-art facility in Statesboro will feature luxury suites, a multi-functional gym for players, a restaurant and craft brewery sourced by the local Eagle Creek Brewery, and a team merchandise store. In addition to League One matches, the Optim Health System Field will host League Two matches for Tormenta FC 2, USL Academy matches, and both the Georgia Southern University Men’s and Women’s NCAA Division I soccer teams.

“It is projects like these that are going to aid our efforts in putting our people to work and move our city forward to be a destination-class city with a booming economy,” Statesboro Mayor Jonathan McCollar said in his 2021 State of the City speech this week.

When the stadium isn’t hosting soccer, it will host concerts and other outdoor events. The larger development plans for the area around the stadium include a Publix Supermarket, movie theater, hotel, retail, commercial and residential spaces.

“It’s a stadium-anchored district, and a new gateway to both the city and the university here,” Van Tassell said. “It’s a whole new district inside the city, and you can’t put a price tag on how that affects a region.

“Professional stadiums are legitimizers, and we’re looking to build our stadium the right way, so that it can be the anchor of a live-work-play district. Stadiums like that are a feather in the cap of the regions that have them.”

The process of building such a stadium is of course a complex project with a lot of steps, but despite the complications brought on by the COVID-19 pandemic, Tormenta’s stadium is still on track to open for the start of the 2022 League One season. The next steps in the development of the stadium are on the immediate horizon, though.

“The announcement of the naming rights for the stadium itself should be forthcoming, we’re in the process of inking that deal,” said Van Tassell. “Then of course, the stadium has to start coming out of the ground. When you build a stadium-anchored district rather than just a stadium, there are extra steps.

“All these pieces have to come together, and we remain on track to having the stadium itself open in 2022. We want to get this right, and we’ve got one shot, and that takes a minute. Everyone, myself included, wishes it could be ready right away. But we’re doing our due diligence, and ultimately that will make it a better stadium and district for our community.”