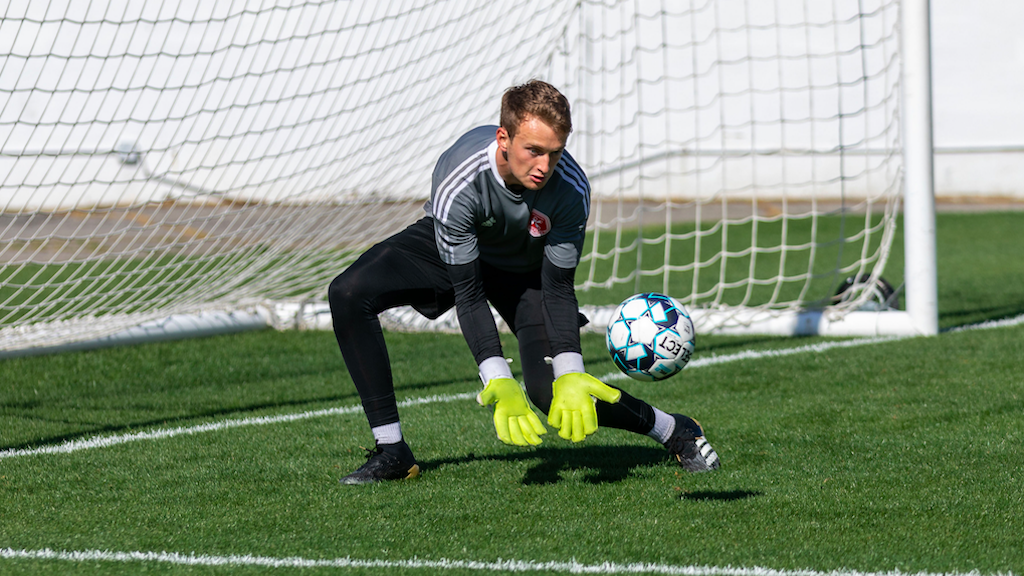 Like his father Jeff, Austin Causey will play goalkeeper for the Kickers, making them the first father-son duo to feature for the club in its 29-year history / Photo courtesy Jessica Hendricks

RICHMOND, Va. – The Richmond Kickers announced on Tuesday that the club has signed goalkeeper Austin Causey for the 2021 USL League One season, pending league and federation approval.

"We brought Austin in this preseason to evaluate him among professional players,” said Darren Sawatzky, Kickers Chief Sporting Officer and Head Coach. “Adding him to our roster is in line with our goal of developing young players for the Richmond Kickers and beyond. He has trained incredibly well and has earned the opportunity here as a young pro. The real work starts now for him and we are excited to watch his growth and to see his competitive fire every day in training."

After impressing the technical staff during this preseason, Causey signs his first professional contract with the Kickers. He began his academy career in Richmond, playing for Richmond United with both the U14 and U16 teams for the 2015-16 season, making 16 appearances for the club, and posting a 61.6 save percentage.

“It is very exciting for me to have this opportunity, and to sign my first professional contract with the Kickers,” said Causey. “Being able to join such a historic club, not only in U.S. Soccer but within my family, is a dream come true. From day one, I was instantly drawn to the positive and demanding environment that Darren, the staff, and the team had created. It's a privilege to play for a team with this mindset, and the support and guidance I've received from everybody so far has been unbelievable.”

For the 2016-17 season, Causey returned to his home state of Massachusetts to play with the New England Revolution Academy, making nine appearances. During the 2017-18 season, Causey split time with the U17s and the U19s, boasting a 65.5 save percentage in 21 matches. His final two seasons with the Revs saw him make 20 appearances with the U19s.

“We are thrilled to sign Austin to his first pro contract,” said Rob Ukrop, Kickers Chairman. “Like his dad [Jeff Causey] in 1995, Austin not only adds goalkeeping quality but also a team-first mentality that has been critical to our success on and off the field. We are honored to be the first step in Austin’s professional career.”

Causey continued to talk about his father’s influence in not only his decision in signing with the Kickers to become the club’s first second-generation professional player but also playing as a goalkeeper.

“Being able to have the same opportunities as my Dad when he was a professional, is something that I'm very thankful for. He began his professional soccer career with the Kickers, and now I am fortunate to be doing the same thing! Being a goalkeeper himself, naturally, I shifted in the same direction. His guidance over the years has been a defining factor in having this opportunity, and it's amazing that it is with the Kickers. As a family, and for me personally, it's all very exciting.”

A stalwart goalkeeper during his professional career, Jeff Causey manned the goal for the Kickers during their run to both the league title and the U.S. Open Cup Championship in 1995, playing in 25 matches and posting seven shutouts. The Kickers would end the season with just three losses and included a streak of 15 straight wins. He would go on to win the MLS Cup with D.C. United in 1996 along with his second-straight U.S. Open Cup, making 20 appearances in the inaugural season of Major League Soccer. Joining the New England Revolution the next season, Causey made 64 appearances for the Revs until he retired from professional soccer in April 2002.

“As a team, the goal is to win games and bring the USL League One trophy home to Richmond,” Causey continued. “For me, my goal is to contribute to that in every way I can. Each day, I hope to keep getting better, both as an individual and collectively as a team. The passionate and committed culture that the organization emanates is inspiring, and I'm looking forward to the season that lies ahead!”