Triumph collect three points playing down a man in Richmond 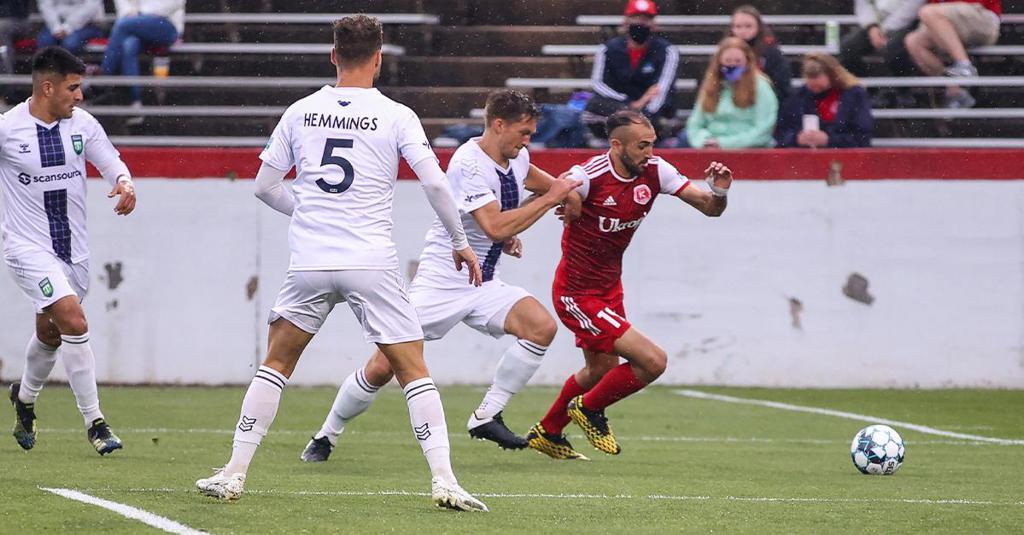 Richmond, VA - Despite going a man down early in rainy and cold conditions Saturday night at City Stadium in Richmond, a resilient Greenville Triumph side collected three points on the road after a Richmond own-goal midway through the second half of action. The 1-0 win will send Greenville back to the Upstate tied for first ahead of the club's home opener on May 1.

The match started out with a controlled and deliberate pace of play from the defending League One Champions, as, the Triumph possessed and switched the point of attack well through the first 40 minutes of action. Richmond's sloppy play out of the back and turnovers in dangerous parts of the field led to promising moments for Greenville early on.

Perhaps the best chance of the match came for Greenville at the midway point of the first half, when an unmarked Max Hemmings had a free header on the back post only to be snatched with a tremendous save by the Richmond goalkeeper, Akira Fitzgerald.

As the game began to stretch and play got chippy, right back Cesar Murillo was shown a second yellow and given an automatic red card, which resulted in the Triumph playing with 10 men for the remainder of the match.

The Triumph controlled almost every ounce of the first half, including the last five minutes when John Harkes's side was down a man. However, the Triumph head coach made immediate changes heading into the second half that included a formational change, Abdi Mohamed making his 2021 debut, a much deeper Triumph backline and a more conservative attacking mindset.

Richmond struggled to move the ball effectively into dangerous positions throughout the second half, only recording two shots on goal and recoding less shots in the second 45 minutes (5) than in the first 45 (7) despite being up a man for more than an entire half.

At an obvious disadvantage, the Upstate side made every move with purpose. In the 74th minute, off a Dallas Jaye punt, Andrew Booth found the well-timed diagonal run of Lachlan McLean to put him behind the Richmond backline and down the right flank. McLean served a dangerous cross into the box and found the foot of retreating Richmond defender Luke Pavon, who cleared into the back of the his own net for an own goal.

The match was full of obstacles and adversity for the defending title-winners, but John Harkes's side proved to be mentally prepared for whatever situation came their way, something the Greenville head coach has been working on daily leading up to the team's first match.

The Greenville Triumph return to Triumph Stadium at Legacy Early College on May 1 for the club's 2021 home opener and welcome fellow title-winning side North Texas. There will be a trophy and banner  presentation to the Triumph fans ahead of the 7:00pm kickoff with gates opening at 6:30pm.

May 1 Tickets On Sale Now