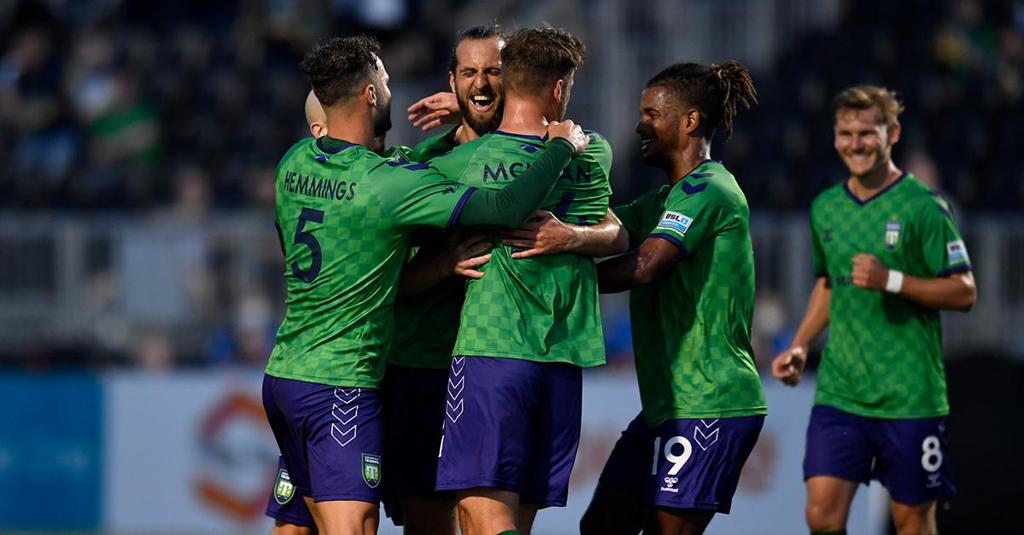 Greenville, SC - The Greenville Triumph Soccer Club put on an offensive clinic in the club's home opener Saturday night, winning 4-0 against North Texas. The electric atmosphere of a covid-capacity sellout was an immense boost for Greenville as the defending League champions saw three different goal scorers and three different players record an assist. It was only the second 4-goal performance in Triumph history, with the first also coming against North Texas back in 2019.

Greenville wasted no time getting on the board when, just six minutes in, the Triumph was awarded a free kick outside the box. Aaron Walker's delivery found the backside run of Brandon Fricke who redirected a header across the goal and into the run of Marios Lomis. It was a spectacular finish from the Dutch forward, and a finish that helped Greenville settle into the atmosphere of their first home match.

Passing patterns were evident all throughout the match tonight, one of which led to the team's second goal. After switching the point of attack, Abdi Mohamed found the slashing run of Don Smart, who crossed a first-time pass back across the goal. His pass found Andrew Booth inside the box, whose one-time finish to the back post put the Triumph up 2-0.

Lomis proved his technical ability in front of goal during tonight's match. His ability to find shot windows in tight spaces was what led to the third goal of the night after McLean found a seam through the North Texas backline.

As the game pressed on, the chemistry in the Triumph attack only continued to improve. Runs were being timed properly, passing patterns were coming to life and players were bringing a level of efficiency to their delivery and their finishing. After recording his first assist, Lachlan McLean added his name to the score column for the first time this season when he found the end of a tremendous long ball from co-captain Tyler Polak. Running away from the face of goal with a player attached to his hip, the Aussie striker displayed exceptional skill to bury his shot low to the back post to give the Triumph their final goal of the night.

The frustration from North Texas began to show through in the second half, as the team off a 4-2 win last weekend could not stop the Triumph attack or connect in their own attacking third. Straight red cards were issued to North Texas during and after the match making for an intense last 15 minutes of action.

For Greenville, tonight, the adversity was continuing to play in a composed manner when the game got chippy and opposing players began to get frustrated. Per Head Coach, John Harkes, that's what proves the character and quality of his team.

"We always talk about the character of our team and the maturity of our team. When things aren't in our control, the way the game is called or the way the other team is playing, how will we react? We reacted to it tonight by playing our game and keeping our style of play in tact."

The Greenville Triumph returns to action next Saturday against North Carolina FC before returning to Triumph Stadium on May 16 to face Union Omaha in the first ever nationally telecast League One Match. Fans can purchase tickets for the May 16 match by clicking here.

Click here to learn about our post-match deals from our partners at Fins, Southern Culture and Papi's Tacos.