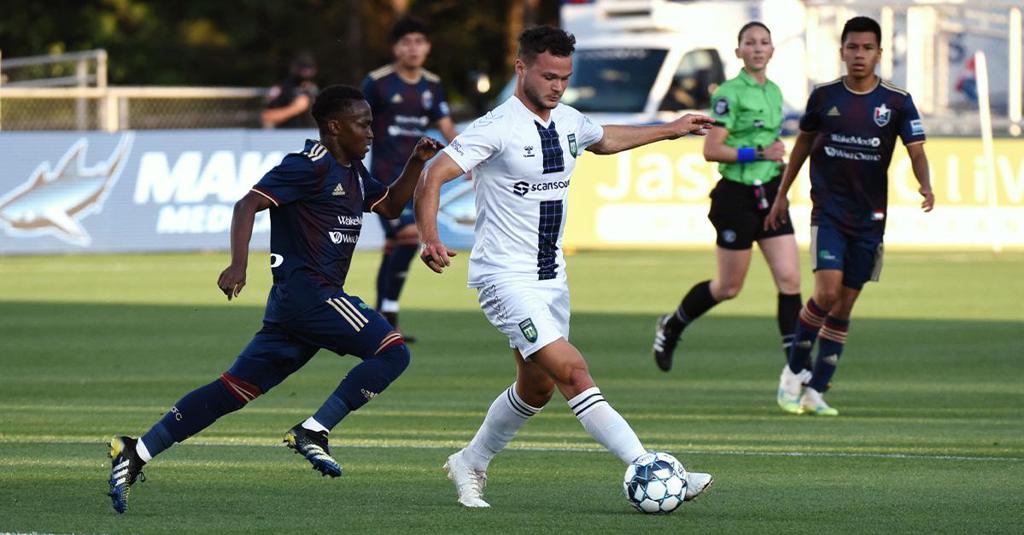 Cary, North Carolina - The Greenville Triumph moved to 3-0 on the 2021 season with a 2-1 victory over the new League One side,North Carolina FC on Saturday night. It was the third victory in as many matches for the defending champions and the second match in a row that both Marios Lomis and Lachlan McLean have netted a goal.

From the first whistle, it seemed like it would be a smooth match for the defending League One champs. Controlling the tempo in similar fashion as last weekend, Greenville came out to make a statement. Just nine minutes into the match, Andrew Booth earned a penalty kick that was converted by the reigning Player of the Week, Marios Lomis.

With Greenville up 1-0, North Carolina FC pushed forward with more intent as the away team began to find success with the long ball. On the end of a tremendous ball that switched the point of attack and put Mohamed and Jaye in a difficult position, NCFC winger Selmir Miscic found himself in a 1-v-1 position with right back, Abdi Mohamed and loads of time on his hands. With a small stepover and a quality finish, NCFC tied the game at one prior to the half.

In a very patient game, both sides had moments of possession, moments of opportunity and moments of defensive brilliance throughout the first portion of the second half. In the 65th, it was Greenville who broke through on a Lachlan McLean header after a scramble in the box led to a Jesus Ibarra service from the left flank.

Around ten minutes after Greenville went up 2-1, defender Cesar Murillo came on for Lomis, and head coach John Harkes dropped his side into defending their lead. With four minutes of stoppage time, NCFC upped the pressure, but Greenville proved the quality of its defense as they held off a late shot and deflection in the 91st minute.

Triumph SC now sits at 9 points through three matches. The club will return to Triumph Stadium on May 16 as the host of League One's first ever national telecast, as they take on Union Omaha at 4:00 pm on ESPN2.