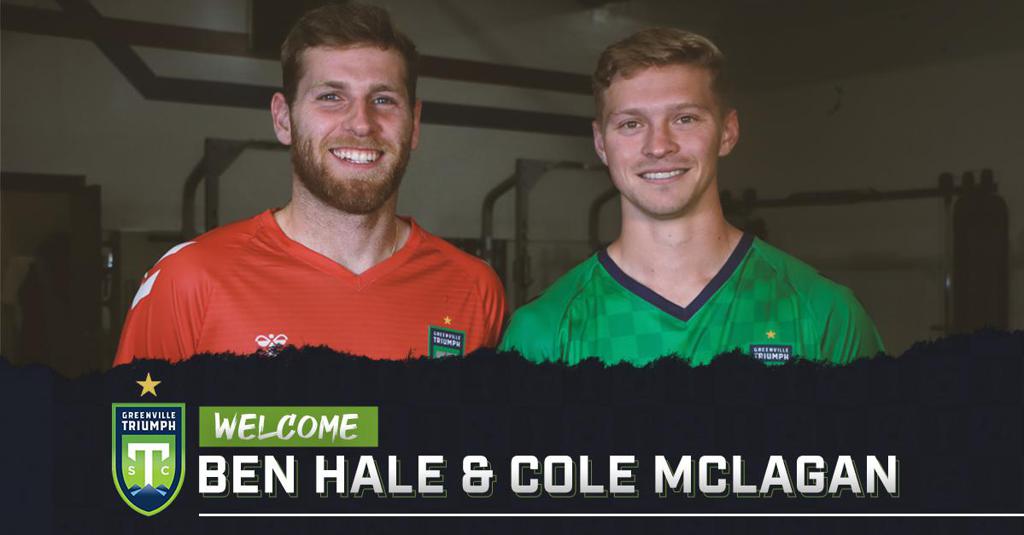 Greenville, SC - The Greenville Triumph Soccer Club has signed former Furman players Cole McLagan and Ben Hale to professional contracts for the remainder of the 2021 season, pending league and federation approval. McLagan and Hale come to the Triumph following a shortened spring season for Furman Men's Soccer that saw the school finish the regular season on top of the Southern Conference standings.

McLagan, a defender, is a talented player capable of playing both sides of the ball. The Lee's Summit, Missouri native garnered second team All-Southern Conference and SoCon All-Freshman honors after tallying four goals and adding an assist during his redshirt freshman campaign in 2017. He was a SoCon Academic Honor Roll member in 2018 and earned first team All-Southern Conference honors as a defender in 2019 after leading the Paladins with eight goals and three assists. McLagan added three goals, two assists and first team All-Conference honors to his career record during the 2020 season.

"Cole is excitingly fast and a very versatile player. He's been training with us for a while now, and we love his optimistic approach to the game. He's a competitor and you can tell by watching him that he thoroughly enjoys the game," said Triumph head coach John Harkes.

Hale came to Furman from Frisco, Texas in 2016 after a standout youth career highlighted by his time with U-19 National Team and the FC Dallas USSF Academy squad. Following a redshirt his freshman year due to an ACL injury, Hale rebounded in a big way and earned second team All-Southern Conference honors and SoCon All-Freshman honors after starting 18 matches in goal with six solo shutouts. In 2018, the 6'1" goalkeeper won Southern Conference Goalkeeper of the Year and earned a first team All-SoCon selection after leading Furman to a SoCon Tournament title and NCAA Tournament second round appearance. Hale was limited to just four starts in 2019 due to an injury but finished his redshirt senior campaign in 2020 with 9 starts, 37 saves and a 0.97 GAA and became the first player in Conference history to earn both Goalkeeper and Player of the Year honors.

"Ben is a very talented goalkeeper and we've been following him for a number of years at Furman," said Harkes. He's a great shot stopper, excellent trainer and a natural leader. I think he has a number of good qualities that can transition into the professional level."

"They're both very similar," said Furman head coach Doug Allison. "They're both extremely competitive, natural leaders and players that want to serve. Although they aren't from this area, they have become so involved in the community." Allison continued, "Their qualities both on and off the field will translate very well at the professional level."

When asked how the connection with Greenville Triumph came about, Allison referenced playing against Triumph assistant coach, Rick Wright. He also referenced the similar ideals that he and head coach John Harkes have regarding player recruitment.

"I've been here for 26 years," said Allison, "And I came to realize quickly that my job is more than winning games. My job is also to graduate players and help them become leaders in whatever field they grow up in. I know that is important for John -- to have not only quality players, but quality young men in the community, and that's what we hope to produce here at Furman."

McLagan and Hale join a veteran Triumph roster that has led the club to a 3-0-0 start to the 2021 USL League One regular season. They face 2020 runner-up Union Omaha at home Sunday, May 16, in a nationally-televised match on ESPN2 at 4:00 PM.

About Greenville Heritage Federal Credit Union: Triumph roster moves are brought to you by Greenville Heritage Federal Credit Union. Higher deposit rates, lower loan rates, and cash back rewards are just a few of the ways they put money back in their members' wallets. You can receive a FREE Box of checks or custom debit card when you open a new checking account and $100 Cash Back on consumer loans of $10,000 or more!