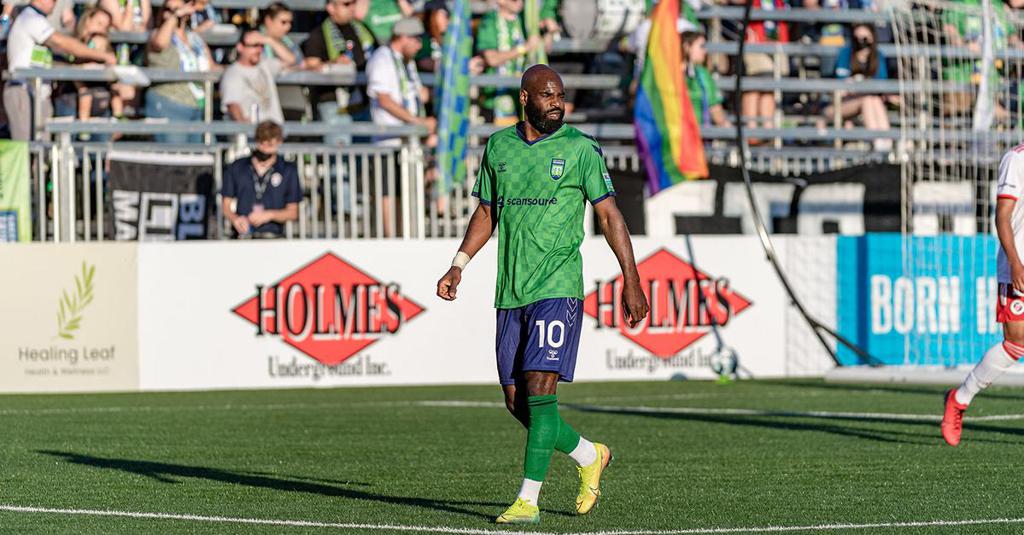 Greenville, SC - The Greenville Triumph host Union Omaha at Triumph Stadium this Sunday for the first-ever nationally-televised USL League One match, presented by the YMCA of Greenville. Meeting once in the 2020 regular season, Omaha and Greenville were set to meet just twelve days later in the League One title match. Due to positive COVID tests within the Omaha organization, the final was cancelled, and Greenville was named League One Title-Winners on a points-per-match basis. The ESPN2 match will be the first time the two sides share a pitch since the 2-1 Omaha win at Triumph Stadium last October.

Union Omaha is the only other 3-0 team in the league after their win at New England Revolution Wednesday night. Greg Hurst scored the lone goal after coming off the bench alongside Evan Conway in the 59' minute. Conway and Hurst have proved to be a dangerous pairing, extremely fast and very willing to run at players. Both players have two goals across the first three matches, and as the season progresses more and more attention will be on Hurst and Conway, and they'll start to draw more defensive pressure and awareness. Omaha does have other effective weapons across their front lines who can strike balls from distance and take players on effectively, including Viader I Masdeu, who leads the league in chances created with nine already logged during the first three matches.

Omaha's movement patterns off the ball are very effective, and the team transitions quickly and without hesitation. From a defensive perspective, it's safe to say this will be the toughest test Greenville has seen this season.

Pressure On The Ball: Triumph head coach John Harkes stated that it wasn't his team's best performance last Saturday against North Carolina FC. Greenville still found a way to win, and was much better throughout the second half, but could have easily been down at the half if NCFC had capitalized on a few chances. Harkes felt his team lacked conviction in the final third and struggled to get adequate pressure on the ball. North Carolina was able to expose the gaps in behind Greenville on multiple occasions because their outside backs and central midfield players had plenty of time on the ball to pick their heads up and play. With a team as quick to transition as Omaha, and as fast as the Omaha front line, getting adequate pressure on the ball will be a must for Greenville this Sunday.

Focus on Us: As the excitement grows around hosting the League's first nationally televised match, it would be all too easy to get distracted and lose sight of the habits that make you successful. For Harkes, he's aware of the storylines. His players are aware of the storylines, and there is a level of excitement to play on national television. But Harkes and his side all know they are best when the focus is on what Greenville does well. “Simply put, we can’t let that be a distraction. We still have to focus on the things day to day that make us successful," said Harkes. "Mentally, we are at our best when we simply focus on who we are.”

Team of the Week: Lachlan McLean and Alex Morrell were selected to League One’s Team of the Week (5). A back-to-back selection for McLean, the Aussie scored his second goal of the season in game-winning fashion last Saturday. Morrell made his starting debut after being out with a hamstring injury and created the most chances for the Greenville attack to earn his first Team of the Week appearance.

Points Leaders: Marios Lomis leads the team with three goals and six points, while Lachlan McLean is just behind the Dutch forward with two goals, one assist and five points. Dallas Jaye is second in clean sheets (2) to Omaha's Rashid Nuhu (3).

All You Need To Know: We are excited to be welcoming fans back in a limited capacity for the 2021 season. If this is your first match at Triumph Stadium, please take a moment to familiarize yourself with our matchday policies and procedures. You can find all you need to know for matchday by checking out our A-Z guide.

Missed out on tickets for Sunday's match? Our restaurant partners have you covered and will be showing the ESPN2 match as well as offering incentives to Triumph fans planning to watch the match there or planning to hang out after the match. Wear your gear, and keep your tickets!

Buy 1 game, Get 1 Free. Fans must wear Triumph gear to get the discount.

$2 off one 16 oz. Triumph beer. Fans must wear Triumph gear to get the discount.

Greenville Triumph SC will head south for their next match against regional rivalry South Georgia Tormenta FC on Saturday, May 22. Greenville at South Georgia will be the last match until June 13th when Greenville travels to Globe Life Park for the second meeting with North Texas.