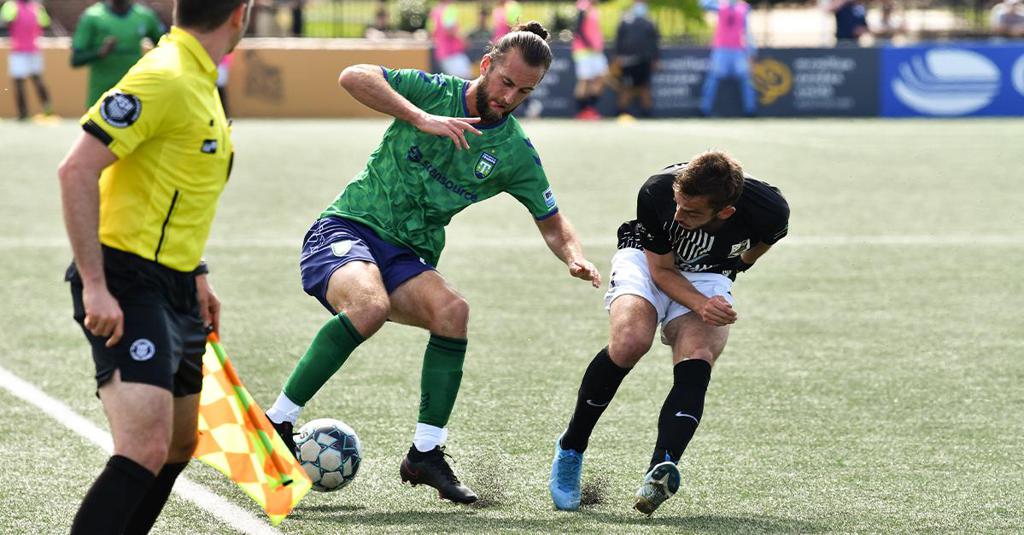 Greenville, SC - The Greenville Triumph remain undefeated through four matches, with the first-ever nationally televised League One match ending in a 1-1 draw after a second half equalizer from visiting Union Omaha. Marios Lomis scored the lone goal for Greenville in their Sunday afternoon matchup and has scored in all four Triumph matches thus far.

The highly anticipated Week 6 matchup got off to a fast and exciting start in front of another covid-capacity sold-out crowd at Triumph Stadium. Both sides had a handful of chances throughout the first half, and although both attacks generated six shots, it felt as though Greenville saw the majority of opportunities. Midfielder Max Hemmings delivered several dangerous balls into the box behind the Omaha backline, and Don Smart made his presence known on the flank during the first half.

Greenville did a tremendous job transitioning numbers behind the ball, making it extremely difficult for the crafty Omaha attack to find gaps. It was that defensive work from Andrew Booth, who capitalized on a poor first touch in the Omaha midfield and found himself facing goal, in space and with a streaking Marios Lomis to his right. Lomis's wide run opened up the passing gap, and Booth delivered to put the Triumph's most clinical finisher in front of goal to find the back post and put the defending League One champions up 1-0.

The momentum switched quickly after halftime as the Omaha attack began to pick up steam. After a near deflection trying to clear a Devin Boyce shot on goal, Omaha was awarded a corner kick and, in the scrum of a redirect, found an unmarked Nic Firmino at the top of the box. Firmino's half-volley finish was buried past a diving Dallas Jaye to even the match at one with 30 minutes left to play.

Fatigue was a factor throughout the second half, and while the Greenville attack found a few dangerous opportunities, they struggled to convert and ended the match tied 1-1. Omaha remains unbeaten when facing Greenville and both sides will enter Week 7 with identical 3-0-1 records.

"The first half, we tested them quite a bit. We exploited alot of their spaces. They dropped off and conceded quite a bit of space to us, and we were unlucky to finish a couple of chances," said Triumph head coach, John Harkes. "Then the second half, we really slowed the game down for them. And the goal came down to discipline on set pieces. These are times, early in the season and situations early in the season, where you see who steps up and we needed that today."

Greenville Triumph returns to action Saturday, May 22 against regional rival South Georgia Tormenta. The match will kickoff at Erk Russell Park at 7:00pm and will be aired on ESPN+ and the CW-62.