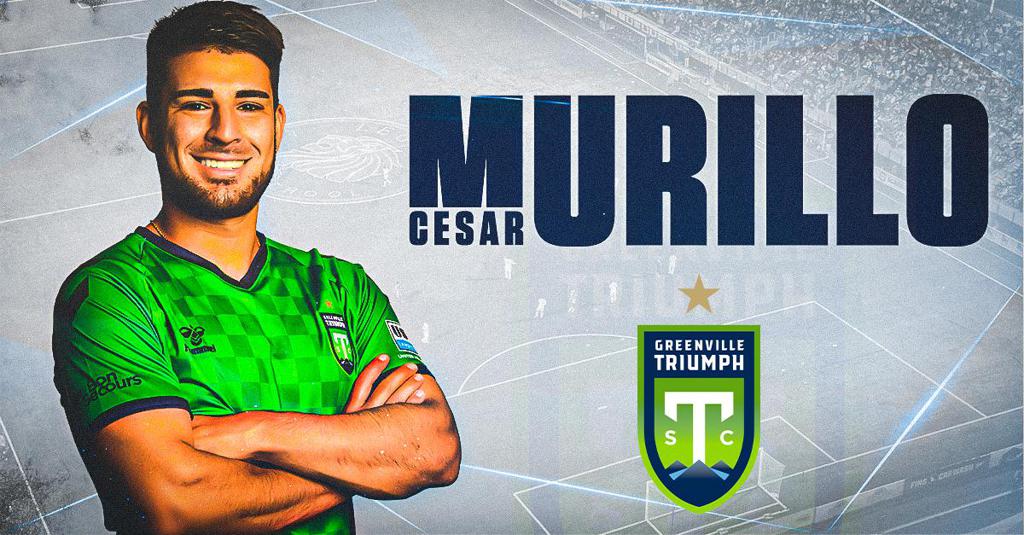 Greenville, SC - It doesn't take long after being around Triumph defender Cesar Murillo to notice his passion for the game. Second to that is his maturity, and a sense of wisdom and a sense of reflection that can be seen as a direct correlation to his 14-year old self's decision to pursue his dream.

Cesar Murillo grew up in the border city of El Paso, Texas just across from Juarez, Mexico. Surrounded by a soccer community and raised by a father who had played soccer his whole life, Murillo remembers from a young age how important the game was to his family.

"It [Juarez, Mexico and El Paso, Texas] is a big soccer community. My dad played soccer his whole life and hearing his stories throughout my life is what motivated me to pick it up," said Murillo. "I played a bunch of different sports growing up -- baseball, basketball, football, cross country, track. I was always very active growing up. It wasn't until my 8th grade year that my parents really made me choose to focus on one for my path. For me it was between baseball and soccer, and soccer meant a lot to my family. So I decided to continue with that, and here I am today, what feels like just a couple of years later."

Family has always been important to Murillo, which made the decision to leave his family at the young age of 14 even harder. Knowing he wanted to pursue a career as a professional soccer career, Murillo sacrificed a normal teenage life for one in the throws of the Academy world.

"I was about 14 when I had to make the decision with my parents. It was really hard. My dad told me, 'Go to Dallas. Follow your dreams.' But I knew I'd be living alone, and so did my mom. My mom was really iffy about it. Just like any other mom, she wanted to protect me. She wanted to be there for me. But we couldn't afford for my whole family to move to Dallas, so I knew that I was going to be going on my own."

But it didn't take long for Murillo to make Dallas his home away from home. Through high school classmates, teammates on the field, coaching staff members, Murillo recalls feeling welcome and taken care of at every turn during his time in the FC Dallas Academy and points to that experience as a catalyst for how he approaches his own relationships.

"Even through hard times, we [family] were always laughing, always cracking jokes. So being able to grow with my teammates and my coaches, and even teachers, they all became a part of my extended family. I met a lot of friends in high school, not even just on the soccer team, but my classmates, and they welcomed me into their family. So that made it a lot easier to be able to have people really took care of me and my friends. People knew knew that we were there alone, so it was awesome to see how a community of people can come together and how much they wanted to help me. That also helped me wrap my head around helping others, even when it doesn't benefit me at all. I like to give everyone that consideration; and in that circumstance, everyone tends to be my family no matter where I go."

Just as Murillo was settling into his extended family and his Dallas community, it was time for a new chapter: college. Murillo chose to play at the College of Charleston -- 1,120 miles from Dallas and 1,733 miles from his hometown of El Paso, Texas. The All-Colonial Athletic Association selection felt the transition to a new home was much easier this time around. Having lived on his own for a handful of years and stepping into the role of older brother throughout his academy experience, Murillo felt it was his responsibility to be a mentor and a guide for the younger players on his team.

"At Dallas, I had to learn how to cook and clean and wash and really do everything for myself at a very young age. Even though I was young while I was there, I was still trying to take care of the guys younger than me whether that was taking them to practice or taking them to school or just guiding them and showing them the way. So, even though I was further away, it was a little bit easier for me this time, and I felt like it was my responsibility to teach the younger guys some of the lessons I learned in Dallas. I believe if you surround yourself with people who are driven, who are focused, and who want the same thing as you, then it doesn't really matter if you're messy, if you're clean or what differences you have, we can help each other."

While the Triumph defender can seemingly make any place feel like home, there's nowhere that can actually take its place. After four standout years at the College of Charleston, Murillo headed back to Texas to attend an open tryout for North Texas Soccer Club, the USL League One affiliate within the organization he was raised. A wrong email address was almost the difference in the start and end of Murillo's professional career, the very thing he had been working towards since he first left El Paso.

"Out of college I had been trying out for teams, and it wasn't really working out. I was kind of running out of options. I had gone to an open tryout with North Texas, and they told me they really liked me. They said they were going to email me about coming back for preseason, but on the signup sheet I gave the wrong email, an email that I hadn't used in a really long time since it was my college email. I was very down and disappointed thinking that maybe all this was over. My mom and I had conversations about me coming back home and getting a job, so I ended up going to work at a workhouse in Indiana with one of my ex coaches at Charleston. He was going to show me the ropes to eventually move up in the company. So I'm working, and one day I was just checking my laptop and on the bookmarks was my old email. I thought 'I'm going to check it out,' and I saw it. The email said, 'Hey Cesar we're just wondering if you're going to come do preseason with us?' It was from North Texas, and I was just in shock."

Despite feeling like his dream was coming to an abrupt and unexpected end, Murillo stayed in shape as he worked in the warehouse, going on jogs even though that required an early wake-up call. He continued to pray that something would workout, his heart and his mind still clearly invested in the same goal he set out to accomplish at age 13. He signed his first professional contract with USL League One's North Texas Soccer Club just ahead of their inaugural 2019 season.

"I think that story is a sign, to anyone out there, that if you work hard, it doesn't really matter whether you're early or late. Everyone has their own story. Just because your friends and family are out there accomplishing things at certain times -- I believe that everyone has their own time, and it's not what time you get there, it's just actually getting there. That was a big lesson that I learned. I keep that in my mind every day, and that's what keeps me motivated out here and that's what keeps me wanting to motivate others. I know that there's a lot of potential on this team [Greenville], and if the players bring the right attitude every day, we'll not only win the championship again, but we'll see players go to the MLS."

From an uncertain future in the game he cherishes to being the first and only USL League player with back-to-back championships, and with different teams. When asked about being the first player to sketch his name in the championship column twice, Murillo humbly expressed his gratitude towards the organizations and fans that made his journey possible and stated that both wins have their own special place in his heart, as do both clubs. Murillo, a player with grit and passion, said the most important thing his roller coaster journey has taught him so far is to understand that there will be highs and there will be lows, but that shouldn't be the focus. To drive success for himself, you must focus on work ethic and a resounding belief in yourself despite the waves that are sure to come.

"Don't be too high on things like winning championships, or whether or not you get Player of the Week, earn Team of the Week, get Goal of the Week. Don't get too caught up on that, but also don't get too low when you lose a game or maybe you're not playing well or when you get injured. You have to battle things. Too often there are people that can get really low when things aren't going their way -- they get into this rabbit hole. Then when they're doing really well, they get way too high and lose focus of what got them there. So what keeps me focused, and what keeps me driven, is being level headed, very neutral, and just riding the wave. When you remember why you're here in the first place, you can go really far."