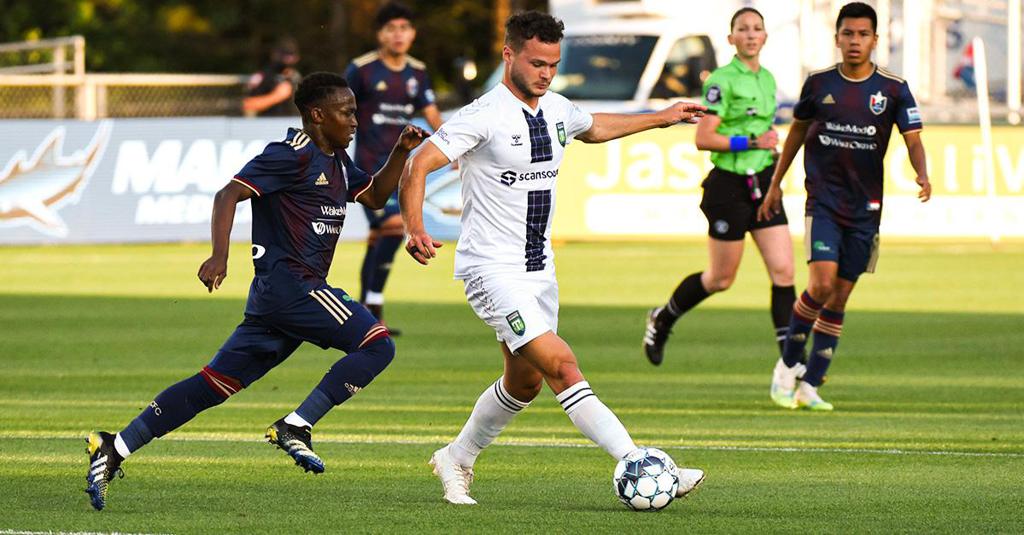 Greenville, SC - Looking to rebound from their first loss of the season, the Triumph return to the Upstate for a second match against North Carolina FC, kicking off at 7:00 PM Wednesday night. On Sunday night, Greenville was defeated 3-0 by 2019 League Champion, North Texas SC, after a three-week gap in their 28-game schedule.

While Greenville looks to find its rhythm once more, North Carolina FC is still searching for its first League One victory. Newcomers to League One this season, NCFC has struggled to close matches, losing by no more than one goal in each of the team's four losses.

The North Carolina side has failed to find three points in a match this season, but results don't always tell the whole picture. Despite the winless record, North Carolina FC has only been shutout twice in the team's opening five matches, including a 0-0 draw against Richmond a few weeks back. NCFC came out very strong against the Triumph in the first meeting between the two sides and had the match knotted at one until Lachlan McLean's game winner in the 65th minute. North Carolina FC is a team that's very capable of breaking lines of pressure quickly, a young team that's full of energy and dangerous on the long ball. With time, space and a lack of pressure on the ball, their pace and delivery could prove problematic for any backline.

What to Watch For

Finding The Rhythm: It was an uncharacteristic performance for the defending champions on Sunday. Head Coach John Harkes felt that, "At the end of the day, too many quality players had poor performances." While the general disappointment is understandable from the high-quality side that is Greenville Triumph, the short turnaround might prove to be helpful with regards to mentality. With matches spaced no more than four days apart over the next two weeks, there is no time to dwell on what should have been done. Across 28 matches, a loss here and there is really just a blimp on the record; and for Greenville, the most important thing now is the response and building confidence in their ability once again.

The Long Ball: As mentioned earlier, North Carolina's record doesn't show the full picture. When given time and space on the ball, NCFC can be quite dangerous with their delivery and pace up front. That was made evident throughout the first half of the May 8 matchup between these two sides, as NCFC was able to expose the gaps in behind Greenville on multiple occasions. However, that game was played without the heartbeat Greenville's midfield with both Noah Pilato and Aaron Walker out with injuries.

Player of the Month: Dutch striker Marios Lomis was selected as USL League One’s Player of the Month (May) after scoring five goals in Triumph SC’s opening five matches. Lomis ended the month of May leading the Golden Boot race.

Stadium Capacity Plans for June: The club will continue a phased approach towards a full reopen, raising stadium capacity to 70%, allowing for roughly up to 2800 fans. For more information, click here.

Partnership News: Alongside previously announced 2021 partnerships, the Greenville Triumph Soccer Club is pleased to welcome an expanded group of corporate partners for the 2021 season. For more information including partnership details, click here.

Player Profile: Media Relations Manager Marion Cole sat down with Texas native, Cesar Murillo, about his path to the professional ranks. For the full story on the back-to-back League One champion, click here.

Beginning June 16, Bon Secours will on site for every Triumph home match to provide free COVID vaccines. They are offering Pfizer to fans 12 years of age and older (kids between the ages of12-17 must have a parent/guardian present).

Those who receive a vaccination at the match will receive one free flex ticket to redeem at a future 2021 match.

The Greenville Triumph take on South Georgia Tormenta for the second time this season on Saturday, June 19 at Erk Russell Park. The Upstate side then returns to Triumph Stadium for a Pride Night matchup against Forward Madison FC on Wednesday, June 23. The match begins at 7:00pm with gates opening at 6:00pm.