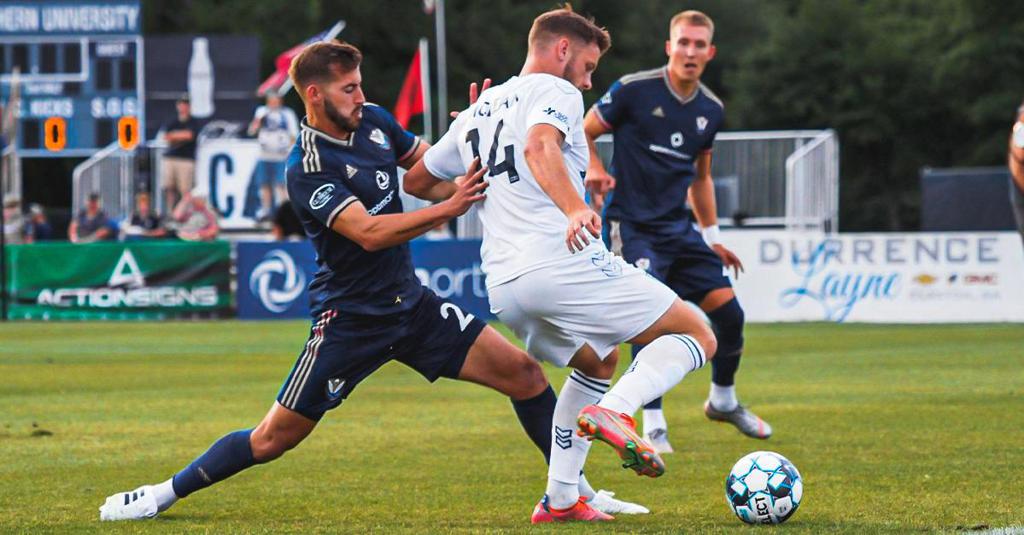 Statesboro, GA - For the second time this season, Greenville Triumph travel to Erk Russell Park to face regional rival, South Georgia Tormenta FC. The two sides have met a total of seven times over the last three seasons with Greenville leading 4-2-1 overall and 1-0-0 this year, last meeting on May 22 also at Erk Russell Park. Marios Lomis scored the lone goal of the match off an assist from midfielder, Don Smart.

This will mark the Triumph's third match in a one-week span including a trip to Arlington, Texas and a grueling home match on Wednesday night. After going down a goal early in the first half, Greenville fought to score two unanswered goals, winning 2-1 in 93 minutes of action. Don Smart recorded his first goal while Marios Lomis and Max Hemmings found their first assists of the season. Scoring the game-winner in the 48th minute, Lomis once again took lead of the Golden Boot race with six goals through seven games.

Much has changed for the South Georgia side since these two teams last shared the pitch. Heading into the May 22 matchup, Tormenta FC had just one win through five matches and had allowed eight goals, third most in the league, with only a 10% conversion rate in front of goal.

Almost one month later, Tormenta FC has found a hot streak, winning three straight with the capability of jumping into third place with a win on Saturday. Should Tormenta FC down the Triumph, it will mark the first-ever four-game win streak since the club's inception. The difference for Tormenta FC through the last few weeks has more to do with the defensive side of the ball. South Georgia has logged three clean sheets, yet they have remained at the same 10% shots on goal to goals scored conversion rate.

Be Steady: Greenville's jam-packed June schedule is bound to cause fatigue both physically and mentally. It's a grueling stretch of matches, and Greenville has already experienced quite a number of adversities through the beginning stages of the season including nagging injuries to key players, playing down a man on a multiple occasions, and a very long mid-season layoff. And after suffering an uncharacteristic loss to North Texas, it would have been easy to get caught up in trying to make adjustments. Adjustments are good and quite often necessary; but for Greenville, it's more about understanding what has led to their continued success -- consistently doing the small things right and believing that quality performances are more important than results.

Everyone's Best Shot: Part of being a title-winning side is understanding that everyone is going to give you their best. Harkes has stated multiple times throughout his League One tenure that there are no easy games and that every single team is capable of winning on any given day. Being the defending title-winning club only amplifies that fact. For Tormenta FC specifically, they're going for their first-ever four-game win streak at their home field and a potential to jump firmly into a top spot in the standings. Match that with the well-established regional rivalry between the two sides and this game will be no walk in the park despite how it may look from the stats column.

Player Profile: Media Relations Manager Marion Cole sat down with Texas native, Cesar Murillo, about his path to the professional ranks. For the full story on the back-to-back League One champion, click here.

The Greenville Triumph return to Triumph Stadium at Legacy Early College on Wednesday, June 23 to celebrate Pride Night presented by hummel. The match against Forward Madison will be the first time the two sides have shared a pitch in the 2021 season. Gates open at 6:00pm with kickoff slated for 7:00pm.