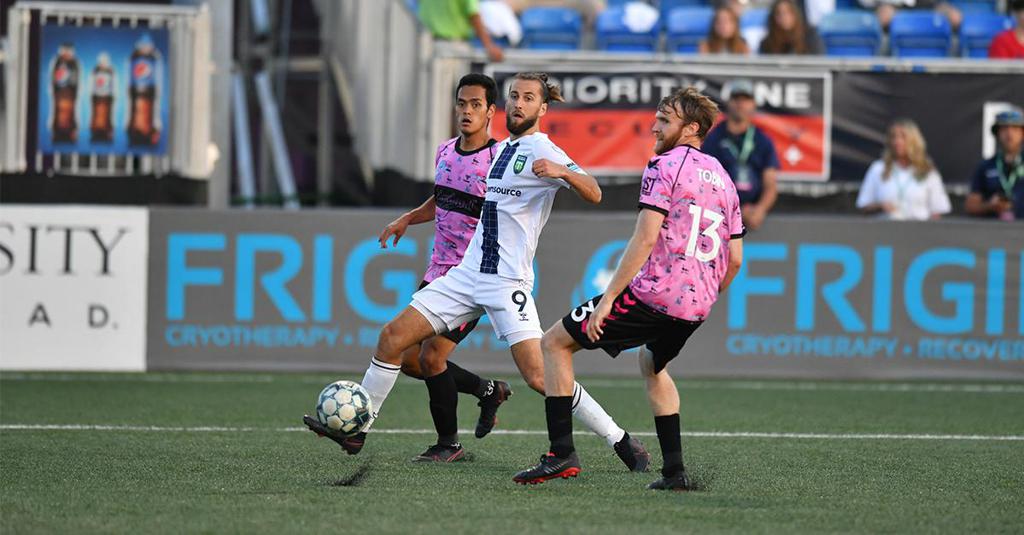 Greenville, SC - The Greenville Triumph fought back to a 2-2 draw against Forward Madison FC in its Wednesday night matchup at Triumph Stadium. Down 2-0 within the first 20 minutes, the Triumph scored two unanswered goals of their own from Andrew Booth and Marios Lomis. The lone point keeps Greenville undefeated through their 2021 home schedule to date, while the two goals allowed mark the team's fourth consecutive match without a clean sheet.

A goal conceded in the first fifteen minutes has become common practice during the grueling stretch, and tonight was no different as Forward Madison opened the scoring in the 11th minute of action when a penalty kick was awarded. Aaron Molloy put one right down the middle to give the Mingos a 1-0 lead.

Minutes later, a turnover in the midfield put Greenville in retreat while the ball found former Triumph striker Jake Keegan down the left flank. Keegan held the attack and passed to the wide open run of Molloy, who found the back of the net once again on a missile strike from distance. Molloy's second goal was the first goal conceded during the run of play since their weeknight match against NCFC.

Down 2-0 with plenty of game left to play, the fatigue was becoming obvious both mentally and physically, as the wear of five matches across 13 days had the Greenville players exhausted and without much relief on the bench. Despite the fatigue, the Triumph continued to push and were able to break through in 29th minute when Aaron Walker played a key ball to switch the point of attack, finding Gavilanes 1v1 on the left side. Gavilanes got to the byline and served a perfect ball into the box that only needed a toe poke from Andrew Booth, as the young professional netted his second goal of the season and put Greenville back in the game 2-1.

The second half was back and forth between both sides. Greenville was the victim of a few unlucky deflections but were finding more opportunities in the final third. In the 66th minute, Greenville was awarded a penalty kick after a deliberate handball in the box. The Dutchman Marios Lomis stepped into the box, calm and collected, and was able to put the Triumph back even at two apiece.

The last 20 minutes of the match saw a number of fouls, but it felt inevitable that Greenville would score a third. Up until the final whistle blew, Greenville continued to knock on the door, but they would settle for the point and 2-2 draw to remain undefeated at their home stadium. Tonight's result is the fourth time out of six meetings that Forward Madison and Triumph SC have played to a draw.

Greenville returns to action Saturday, June 26, traveling to CHI Memorial Stadium in Chattanooga for their first matchup with the Red Wolves. The Red Wolves currently sit just below Greenville in the League One standings.