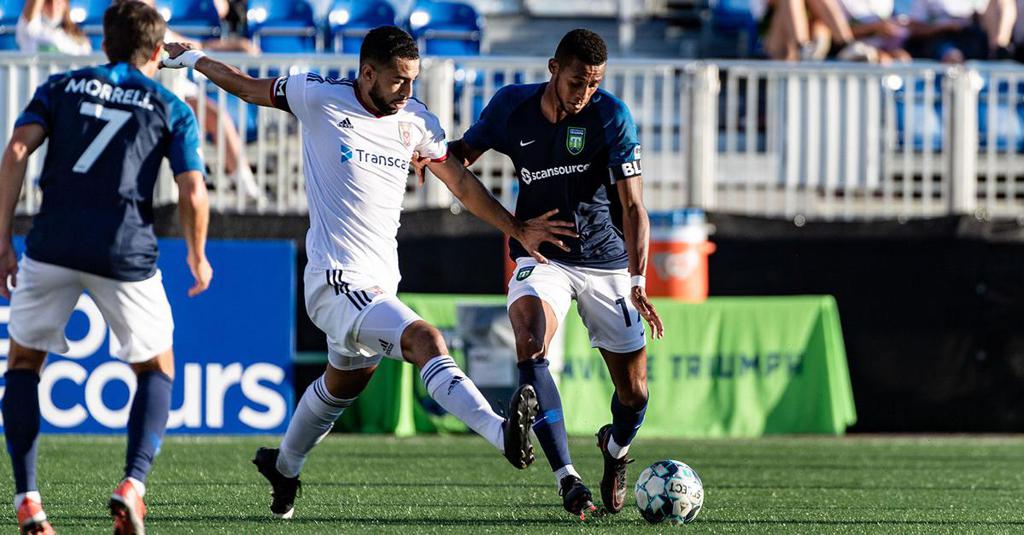 Chattanooga, TN - The Greenville Triumph will close out the grueling five-match stretch at CHI Memorial Stadium on Saturday, June 26. Through its last four, Greenville is 1-2-1 with the most recent result being a 2-2 draw against Forward Madison FC. Greenville was able to come back from a 2-0 deficit and score two unanswered goals, including a Marios Lomis penalty kick that extended his lead in the Golden Boot race with eight goals through nine games played.

The Red Wolves have put together an impressive start to the season, losing only one match through their first seven. At two less matches played than the top-two sides, Chattanooga is well within reach of jumping to the top of the table with a win on Saturday night and an Omaha loss. The 2021 season is Chattanooga's best-ever start in League One competition.

The Tennessee side most recently played to an exciting 3-2 win against North Carolina FC, scoring three unanswered goals after going down 1-0 six minutes into the match. Chattanooga didn't start its three-goal run until the 73rd minute, and although NCFC was able to make it a one-goal game in the 95th, the Red Wolves held on for their fifth win of the season and have yet to drop points at CHI Memorial Stadium.

Late-Game Mentality: Chattanooga has quite a bit of energy coming off the bench and in the second 45 minutes of play. The combination of Juan Galindrez and Marky Hernandez put together three goals and an assist in the team's last outing at CHI Memorial Stadium. Greenville has historically done well this season, not giving up much at all later in the game. In fact, only three of Greenville's 11 goals allowed have come in the second half (Omaha, North Texas, Tormenta).

Energy Imbalance: The single most important contributing factor to Saturday's match will be the potential energy differences in the two sides. Greenville hasn't had more than 72 hours between matches for the last two weeks, while Chattanooga has only played seven games total, two less than the title-winning squad. The Greenville coaching staff is having to make starting XI and travel decisions based first and foremost on who has legs that can provide valuable minutes. Between the injury list and the general toll of playing such a heavy schedule, earning points of any kind speaks to the strong mentality the Triumph players and coaching staff embody. Greenville showed incredible resilience in the 2-2 draw against Madison and indeed were the better side through the second half. If there's any team strong enough to finish out a five-match, 13 day stretch with three points, it's John Harkes' Greenville Triumph.

Injury Report: While Jesus Ibarra, Will Mejia and Evan Lee are returning to the 18-man roster, All-League midfielder Noah Pilato continues to be sidelined with a back injury and Aussie striker Lachlan McLean continues to rest a knee injury. Veteran Don Smart remains unavailable for the second week due to a hamstring injury that occurred during the Tormenta FC match, and right back Abdi Mohamed will also be unavailable for this Saturday's match due to a quad injury.

League One Standings: With the 2-2 draw to Forward Madison on Wednesday night, Greenville not only remains unbeaten at home but also jumped back into second place with 17 points through nine matches played. Omaha tops the table at 18 points through nine and a 5-1-3 record, while Chattanooga sits closely underneath the Triumph at third boasting 16 points through just seven games played. Rounding out the cut-off point is South Georgia Tormenta FC, Fort Lauderdale CF and Toronto FC II, respectively.

Man of the Hour: Marios Lomis continues to lead the league in goals with eight after scoring the game-tying penalty in Triumph SC's 2-2 draw with Madison on Wednesday night. The Dutch striker remains Greenville's points leader with 17 from eight goals and one assist.

The Triumph will finally have a full-week's rest after Saturday's match vs. the Red Wolves. The team will head to the Northeast for a July 4 showdown at Gillette Stadium against New England Revolution II before returning to Upstate on Saturday, July 10 for the team's third meeting with North Carolina FC.