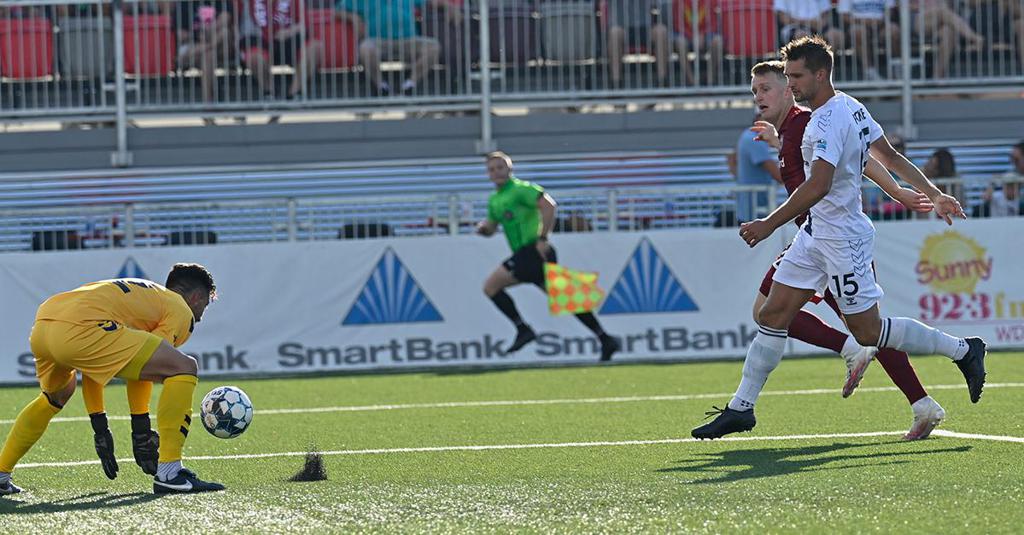 East Ridge, TN - The Greenville Triumph Soccer Club fought off tired legs and a barrage of shots Saturday night, as they closed out a stretch of five matches in thirteen days with a hard-earned 1-1 draw on the road against the Red Wolves at Chi Memorial Stadium in East Ridge.

Greenville came in to the match wounded, missing four frequent starters in Don Smart, Lachlan McLean, Noah Pilato and Abdi Mohamed. Despite their depth and fitness being tested across the last two weeks, the deep Triumph roster stepped up, with rookie Allen Gavilanes opening scoring in the 19th minute after a great one-on-one run into the box led to a shot that bounced off keeper Sebastian Mora-Mora and in to the goal. The lead was short-lived, however, as Chattanooga's Blake Frischknecht was left unmarked and netted a rebound goal in the 24th minute.

The second half began in choppy fashion, with sequence of fouls by both teams. In the 53rd minute, Chattanooga lost coach Jimmy Obleda to a red card after he was shown his second yellow following an argument with officials. As the match wore on, Chattanooga's offense stepped up with shot after shot towards goalkeeper Dallas Jaye. Despite the attack, Jaye and the Triumph defense were able to withstand late pressure during the waining moments, holding the Red Wolves to a lone goal. Greenville earned a corner kick in the final minute of stoppage time, but the ball fluttered wide of goal as the sides settled for a draw.

Greenville now heads back to the Upstate for much-needed rest before traveling to Foxboro, Massachusetts to take on New England Revolution II on Sunday, July 4 at 2:00 PM. The match will be shown locally on The CW-62 and streamed on ESPN+.